I think this is the right one, though his Volunteer interests aren't mentioned.

The second Lord Londesborough was the second largest landowner in the East Riding after Sir Tatton Sykes and was a close friend of the Prince of Wales. He was a patron of the Yorkshire County Cricket Club, sponsoring a couple of matches against Middlesex in 1874 and was one of the prime movers behind the Scarborough Cricket Festival. He went on to become President of the MCC, but he did not forget his roots and tried to keep in touch with matters at the Londesborough Park Cricket Club. In fact many of the seasons' highlights were the cricket weeks held modelled on the Scarborough Cricket Club grander affairs with Londesborough hosting teams from far and wide including Lancashire Pirates, Hull Coal Exporters & Yorkshire Amateurs. More local fixtures around 1880s were played in the York area with Sand Hutton, Castle Howard, Selby Londesborough, Pocklington Grammer School and York. In the north & east of the county this shows fixtures with teams from Beverley, Bridlington, Driffield ,Malton,including some interesting teams from the Hull area named South Myton, Askwiths, Pilgrims, & Hull Albert United as well as Hull CC.

(this is apparently an obituary from the Illustrated London News, and thank goodness it does mention his military and naval interests) 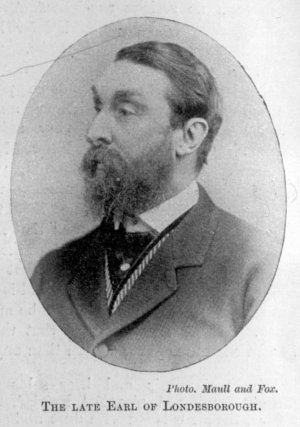 Lord Londesborough, whose attack of influenza was followed by pneumonia, died on Thursday afternoon last week at his house in Grosvenor Square. He had reached the age of sixty-six, but despite the short-sightedness that necessitated the wearing of blue spectacles, he was a man of active habits, a constant driver in the Park, and an interested visitor to his estates of over fifty thousand acres in the North. He had a large hand in making the annual Scarborough Cricket Festival a success; and the London stage had no more interested patron.

Lord Londesborough, who once sat for Scarborough in Parliament, and who married a daughter of the seventh Duke of Beaufort, succeeded his father, the first Baron Londesborough, in 1860, and was advanced to an Earldom in 1887.

He held various Volunteer commands, and was Vice-Admiral of the Yorkshire coast.

His son, Viscount Raincliffe, who succeeds him, was born in 1864, is married to a sister of the Earl of Westmorland, and has an heir, born in 1892.

The remains of the Earl were interred on Tuesday. According to his Lordship's wish, the coffin was borne by fishermen.