Please note that links from OrnaVerum to pages within the ancestry.co.uk website require you to have logged-on to that website in advance of clicking the links in question. Click here for advice about membership.
www.hullcc.gov.uk/museumcollections 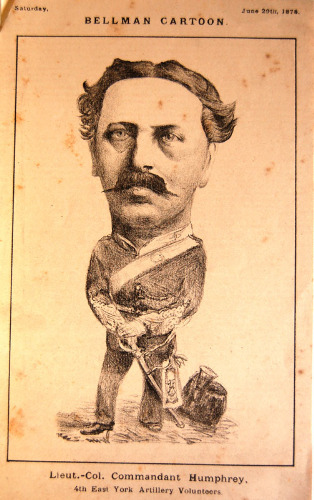 An illustrated page taken from the Bellman Cartoon magazine, issued every Saturday in Hull. It is titled, 'Bellman Cartoon' and it depicts one of Hull's 'local worthies'. This edition was issued on 29th June 1878 and depicts Lieutenant-Colonel Commandant Humphrey, 4th East Yorkshire Artillery Volunteers. He is in uniform holding his sword and his hat is on the floor by his side. The artist's initials are, 'TTW' and these initials are for the artist, Thomas Tindall Wildridge.

For such a prominent figure in Hull society at that time, and indeed such a significant figure in this narrative, Humphrey's details are extraordinarily elusive – not even his forenames, let alone family background, were known with reasonable certaintyA until recently [Jun 2016]. In contrast, quite a number of personal data about his nemesis Saner have gradually yielded to persistent googling.

It is probable that Humphrey had a family connection with – or was owner of – the local shipyard T Humphrey & Son, and that he was the Thomas R Humphrey who becameB 2nd Lieutenant on 6 Sep 1861, and Major on 3 Jul 1869, in the 4th East Riding of York Artillery Volunteer Corps, as duly recorded in the London Gazette and Edinburgh Gazette respectively. But in neither case can we be sure.

He was an indisputably charismatic individual, who had as Lieut Colonel pulled together the smaller local artillery units commanded by Captains or Majors into a corps at least 600 strong and indeed vying for the 1000 mark.

But like any prominent individual he wasn't without his detractors, as the episode of Lieutenant Baxter illustrated. And, much more scarily, the allegations made shortly thereafter by the recently promoted Lieut Colonel Saner and a small coterie of toadies. These were at once investigated by a military tribunal sent by the War Office, and were found to be at best baseless and at worst insignificant.

Saner and his myrmidons were instructed to resign their commissions immediately. And had Saner done so without demur, all would have been well for Humphrey and for Findlay and his wife, I wouldn't have been writing this and in all probability would never have existed as I currently [May 2016] do.C