As he unveils a plaque dedicated to his father, George Orwell's son reveals how he loves Celebrity Big Brother – and voted Tory! 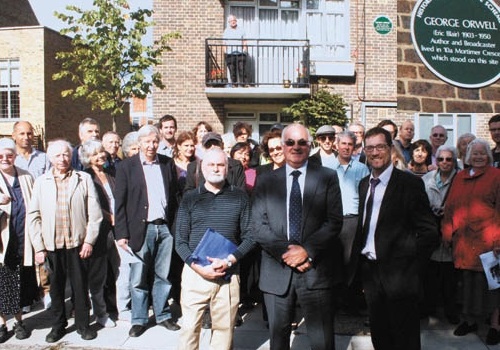 Richard Blair (centre wearing sunglasses) with Ed Fordham (right) and historian Dick Weindling at the unveiling of a plaque in Mortimer Crescent dedicated to his father, George Orwell, outside the former family home

HIS father, George Orwell, was an icon of the socialist movement and author of the world-famous surveillance state polemic, 1984.

But this week Richard Blair revealed that he had voted Tory and "quite liked" Celebrity Big Brother.

"It would appear to some that I am on the wrong side of the political fence," he admitted.

Speaking to the New Journal outside his former home, at the unveiling of a commemorative plaque in Mortimer Crescent, the 68-year-old recalled fond childhood memories, and revealed that an early draft of Animal Farm was almost destroyed after Nazi bombs set their Kilburn home on fire.

Orwell, whose real name was Eric Arthur Blair, lived with his wife Eileen and Richard, who the couple adopted from birth, in the basement flat at 10a Mortimer Crescent from 1942 to 1944.

It was there that Orwell began writing Animal Farm and Richard told the story of how a V1 "Doodlebug" bomb exploded in the garden of North Hall, a large house opposite the flat, in June 1944.

He said: "My father thought his half-finished manuscript was destroyed as everyone had to evacuate the area. But after he returned to file through the ruins of the flat, he found it.

"In fact, shortly before writing 1984 he nearly drowned in a lake in Scotland while we were on a day trip out. We were swimming and suddenly the tide turned. I was with him. It could have gone very wrong that day, and if it had there would be no 1984, there would be no Orwell."

Mr Blair, a semi-retired farmer who lives in Warwickshire, said: "I wasn't allowed to read 1984 till I was 13 because my uncle deemed it too dark for me.

"My father died when I was five-and-a-half so I wanted to read his work – but even then you don't get to know the real person. I did that through memories, the way he loved me and cared for me, and through unofficial biographies – he didn't allow anyone to write an official biography.

"We weren't a kissy-kissy-huggy family. He had TB for a portion of my childhood so he was in quite a dilemma. He had to try and show me love without actually touching me or coming to close to me.

"It must have been incredibly hard for him but he succeeded.

"Instead, he would make me wooden toys. He was very good with his hands and making things, very good at crafts. He loved the countryside, he was an open-air man.

"I knew he loved me very much. When my mother died in 1945, there were various people who said to him, 'Why don't you just un-adopt him again, he is only adopted after all?', but he wouldn't hear it. He would tell them in a rather strong manner that I was his son, and the way he felt about me was exactly as anybody would feel about their son.

"He would tell me stories on the way to the sanatorium where he spent the last parts of his life.

"Sometimes we'd end up parking somewhere for a bit on the journey and the stories would all be about how maybe there were people hiding in the rocks or something along those lines.

"He'd read me plenty of Beatrix Potter most nights before bed, that was my favourite and his."

Richard recalled reading Animal Farm for the first time at preparatory school when he was six.

He said: "Nobody stopped me reading that one. I didn't worry about any of the politics involved in that.

"It is basically a fairy-story about animals getting lippy. There are undertones but I didn't see them till I was a lot older. I have re-read my father's books many times."

Richard was raised on the Scottish island of Jura and now runs a self-catering holiday business. A father of two and grandfather of five children, he has been married to wife Eleanor for 48 years.

He said: "I watched it when it first came on and I thought it was contrived, like everything else on television at the moment. But my wife is quite a fan of it and she was watching it.

"I began to watch one of the episodes with her, the series with Germaine Greer in, and became quite drawn into the whole thing. It was with that series I began to quite like Celebrity Big Brother, a lot more than the normal Big Brother anyway.

"Germaine Greer was the perfect candidate for Celebrity Big Brother. After all, she is a complete oddball. I remember seeing her having a breakdown over the messy kitchen at one point – that simply reaffirmed what I thought she'd be like. Having said that, she is a very intelligent woman.

"I then watched the next series with George Galloway in, and he was licking milk out of a cat bowl or something.

"What is a person meant to think about that, apart from that he must be an utter prat?

"His recent comments [about Julian Assange and non-consensual sex] have confirmed that he is indeed a prat. After seeing that, there was no doubt about that." But Richard says he would not watch the current series of Celebrity Big Brother because "it's the same thing every series now".

He added: "It began with voting for whoever was not in power, which I think is what a lot of people do. But they're all pigs in the same trough, every single one of them. Having said that, I did vote Tory last time, but I must say I'm a cynical Tory."

And what would Eric Blair have made of Tony Blair?

"I think that would have been an extraordinary and very hazardous interview, which says enough," said Richard.

Ed Fordham, who took Glenda Jackson down to the wire as the Lib Dem Parliamentary candidate in 2010, helped raise the £1,000 to get the plaque put up by conducting history tours of Kilburn High Road.

He said that residents had been discussing the idea of a plaque for "50 years or more", adding: "We contacted English Heritage about having a plaque and they said no, because there already is one on Parliament Hill where Orwell also lived. "So me and about 10 of the residents decided to raise the money together in the last 18 months.

"Now we're looking at adding one new plaque a year as part of our independent Kilburn historic plaque scheme. The next ones will be for WH Smith and Louis Wain."