By Vanessa Allen for the Daily Mail

Head over heels in love, 'adoring little David' promised his 'precious Fredie Wedie' she was all he wanted ... 'whatever that may mean'.

t was an ominous sign of what was to come. Seventeen years later, David, better known as King Edward VIII, abdicated to be with another lover – and plunged the monarchy into crisis.

This love letter, written from 'Buckhouse' in 1919, was sent to married socialite Freda Dudley Ward.

Head over heels in love: Freda Dudley Ward and King Edward VIII had a secret relationship for nearly 15 years before he met Wallis Simpson.

In it, the 25-year-old unmarried Prince of Wales told her: 'This is only just a teeny weeny little scrawl to catch the last post sweetheart & to tell you how fearfully madly I'm loving you this afternoon angel & looking forward to 4.30 tomorrow.

'Although I only said all this about 12 hrs ago I can't help saying it all again this afternoon only I mean it even more sweetheart!!'

In an apparent reference to his royal duties, he wrote he was 'fearfully busy' but said it distracted him from missing his lover.

'I just can't get over all your sweetness to your devoted little boy & he is so so happy this afternoon darling & just not caring for anybody or anything altho he's fearfully busy – then I don't have time to realise how much I miss HER & how consequently sad & depressed I am tho hopelessly happy "deep down"!!

'Bless you my very own darling beloved precious little Fredie Wedie for all your divine love which is all I ask for in this world & the next whatever that may mean.' 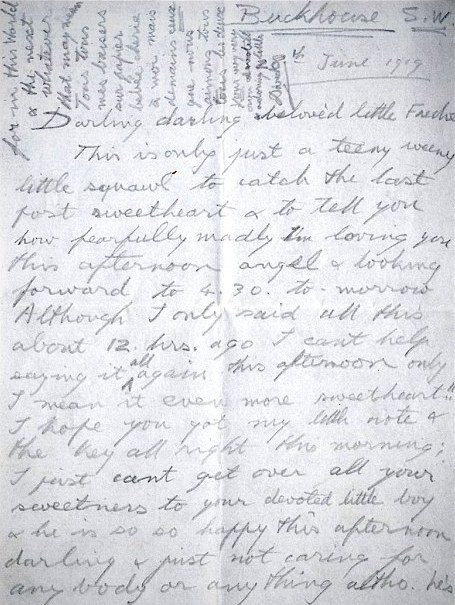 Romantic: In the handwritten, gushing note to Freda Dudley Ward – or 'Darling, Darling, beloved little Fredie', as he calls her – he signs himself as her 'adoring little David'

He signed the letter, to be sold at auction next month, 'Your very very devoted adoring little David' – the name his family used for him.

Mrs Dudley Ward was his first mistress. Their liaison began in 1918 after a chance meeting at a party in an air raid in London and lasted five years.

Then 23, the socialite was a married mother-of-two whose husband, Liberal MP William Dudley Ward, apparently turned a blind eye to the affair.

By 1919, the prince wrote he was 'fearfully madly' in love, and appears to have introduced her to members of the Royal Family, including his brother Bertie, the future King George VI.

Their affair was well-known to aristocrats and politicians.

In 1927, Winston Churchill travelled on a train with the couple, and noted: 'It was quite pathetic to see the prince with Freda. His love is so obvious and undisguisable.' 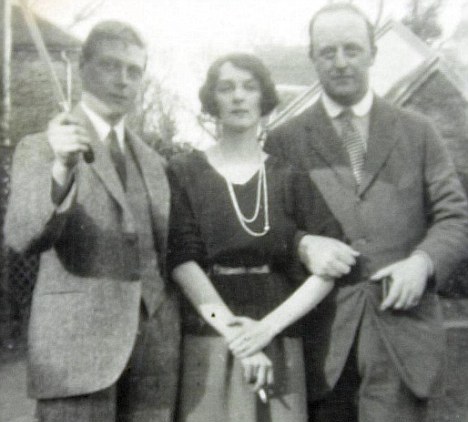 Blind eye: William Dudley-Ward, the husband of Freda and pictured here with the couple, chose to ignore the relationship – despite it being common knowledge

The prince sent her thousands of letters and the pair stayed in contact until he met U.S. divorcee Wallis Simpson, the woman he abdicated for in 1936.

The 1919 letter is expected to sell for up to £600 at auction in London on April 2. A spokesman for International Autograph Auctions said: 'It explains much about his future experiences with Wallis Simpson.'

When the king met Mrs Simpson, he abruptly severed all ties to his previous love. In a call to the Palace in 1934, Mrs Dudley Ward was told by an operator: 'I have orders not to put you through.'

She and Mr Dudley Ward divorced in 1931. Her second marriage also ended in divorce. She died in 1983, at 88, and never spoke of the affair.