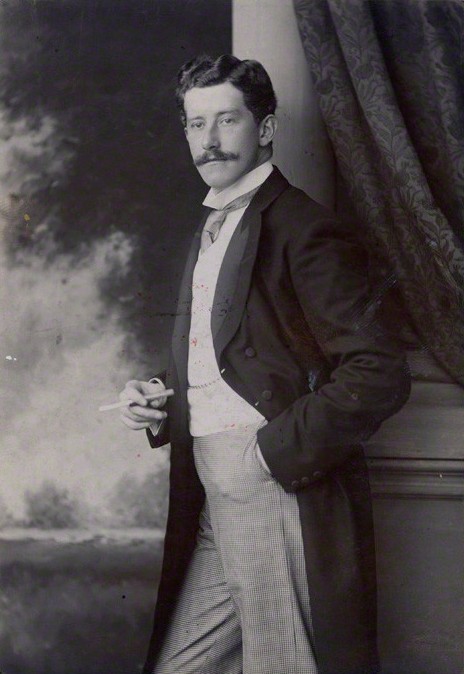 Georgianna "Anna" Robinson was a daughter of Mr. and Mrs. George Robinson who operated Minneapolis' old Grand Opera Hotel on First Avenue. In about 1893 Anna and her sister, Margaret, left Minneapolis for New York City and their parents later followed them. Anna began as an artist's model but soon appeared on the stage in The Kentucky Girl where her beauty brought her many followers. She became best-known to American audiences in Shenandoah. For a while she was the mistress of American attorney and composer Joseph Redding. On her first European tour her admirers were said to include the King of Belgium and the dissolute Duke of Manchester.

Anna met in Monte Carlo a fellow actor known as "James Erskine" but who was actually James Francis Harry St. Clair-Erskine, the 5th Earl of Rosslyn (16 March 1869 – 10 August 1939), who had obtained a Scottish divorce from his first wife in 1902.

His sisters were society hostess Millicent, Duchess of Sutherland, as well as the Countess of Westmoreland. He was a half-brother of the famous beauty, Daisy, Countess of Warwick, who had been a long-standing mistress of the Earl's close friend, King Edward VII, when the king was Prince of Wales.

Erskine served as a soldier with Thorneycroft's Horse at the relief of Ladysmith then was a war correspondent for the London Daily Mail during the South African War. After serving briefly as an editor of Scottish Life, Erskine took to the stage. He married in 1890 Violet Vyner, by whom he had a son and a daughter, but she divorced him for desertion in 1902, the same year in which he appeared on the New York stage in a small role in There's Many a Slip. The production was also the first American appearance of British ingénue Beatrice Irwin who was soon engaged to Erskine. The engagement was called off and Irwin went to Canada while Erskine returned to London where he had a small part in a Pinero play.

Although the Earl inherited 3,400 acres of land along with his titles, his gambling debts were legendary. He was declared bankrupt in 1897 (when a trust was established to look after his estate) and was the first hereditary peer to take to the stage to make his living. By his own estimate toward the end of his life, he admitted to squandering more than £250,000 on horse races and in the card rooms. It was only because he was bankrupt that he was prohibited from taking his seat in the House of Lords. As he later said, "I ended up in Bankruptcy Court. I cannot understand it because I seemed to be winning always." In 1900 he wrote his recollections of the Boer War but later took the book off the market because of his inferences of gross misbehavior on the part of the British military at Sannah's Post. In 1928 he wrote his self-congratulatory memoirs, My Gamble With Life, "strictly for money", and was unapologetic for the resulting scandal over his lack of remorse.

Despite his financial situation, Anna Robinson married on 20 March 1905 in London the 5th Earl of Rosslyn. She had been frugal with her earnings as an actress and acquired a significant amount of savings. She lent her husband £1,000 to lease Scotland's Thurso Castle and to entertain there. She also later testified that, at the time of their marriage, she settled upon him "a generous sum of money ... and often paid other sums for him." In the same year that Lord Rosslyn married Anna Robinson, his younger brother, Alexander, married an American, Winifrede Baker, daughter of Henry William Baker of California.

The Earl's memoirs state that he "accepted blindly [Anna's] statement that she had a house in London and sufficient money added to mine to keep us alive until we made good on the stage." He blatantly lied in insisting that, after two days of marriage, they never saw one another again until their divorce trial. His credibility already in doubt, Lord Rosslyn declared in his book that Anna was "a drug fiend and addicted to drink." At one point in the marriage, a shipment 32 cases of wine was delivered to their door at Thurso. Anna was eventually forced to pay for the wine even though it was ordered by her husband, and she was said to remark upon delivery, "See, it is addressed to me. Your credit isn't good enough," although she later insisted that what she actually said was, "I don't think it nice to have boxes of wine all sent in my name." Anna also was forced to pay her husband's gambling debts. Finally bowing to the inevitable, she obtained a Scottish divorce from the Earl of Rosslyn in July of 1907. At the time he was living in Paris and, after the divorce, was served writs for large amounts of money lent to him by his wife. The Earl unsuccessfully appealed the divorce and never repaid the debts to Anna.

In 1908 the 5th Earl of Rosslyn married the much-younger Vera Bayley and they had two sons and a daughter. [....] Anna Robinson went through all her savings and finally returned to New York, virtually penniless, in 1915. She attempted a return to the stage but was unsuccessful, eventually sinking into penury. In 1917 her friends took her to the New York Hospital where she was transferred to the psychiatric ward at Bellevue Hospital after she had been adjudged insane. On 5 October, Anna Robinson, formerly Countess of Rosslyn, died in the Manhattan State Hospital for the Insane. She was 47.