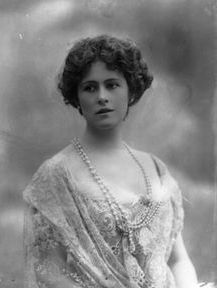 Though unassailably patrician, her parental lineages were not irreproachable, as we shall see – she was possibly well aware of this, but in her tragically abbreviated life her character and conduct transcended any ancestral blemish.

Her father (who to modern ears sounds eerily reminiscent of the BBC Shipping Forecast) was immensely rich, though the source of his family's wealth had made their name a hissing and a byword in their native Scotland.

Her mother's family was also Scottish, and we're back on familiar territory as the St Clair-Erskines were (and of course still are) direct descendants of Sir John Douglas Erskine 19th/2nd Earl of Mar. But as we shall see, Millicent's marital status (married to a homosexual divorcé) and the notorious lifestyle of her brother James, 5th Earl of Rosslyn, were to prove impediments to Rosemary's relationship with the Prince of Wales, even though Millicent herself led an exemplary life of public service and social benefaction.

There's surprisingly little to be found in the public domain about the brief romance between Rosemary and Edward, though somewhat more about her subsequent marriage to William Ward (Viscount Ednam, later the 3rd Earl of Dudley) – a great friend of the Prince of Wales, and her awful death in an air-crash a decade later. Click here1,  2,  3 for links to what I've been able to find.

It's not even entirely clear as to when and where they first met – either in 1917 or 1918, and either at Himley Hall (implying that she was already socially acquainted with William Ward, whose family house it was) or at a field hospital in France where she was serving as a VAD nurse. 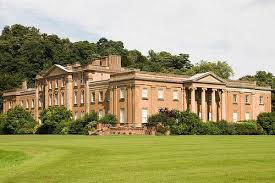 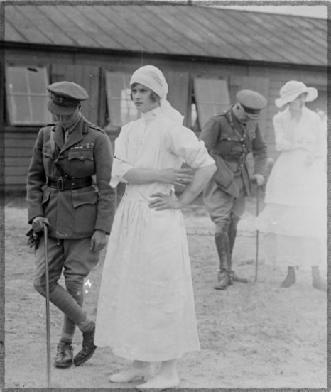 She was strongly built, as one can appreciate from a picture of her in VAD uniform with HRH in military garb – looking slightly pensive, as is the officer behind him – and she is looking rather forthright. Maybe the subject of the utter insanity and senseless slaughter of the Great War is under discussion.

Edward was totally smitten, and sought his father's permission to propose marriage to her (I imagine that's the order in which he did it, and she was certainly reasonably interested in being proposed to by an heir to the throne, though it appears that she was rather doubtful of his strength of character).

So it was up to His Majesty George V, King of England, Emperor of India, and all those other pink bits on the globe, totalling a quarter of the world's population, to decide on the personal destiny of just two of them ...

He was probably a more complex person than his public image of an undereducated martinet (dispatched to the Royal Navy at the tender age of 12), devotee of the grouse moor (and reputedly the finest shot in the Empire), obsessive philatelist, and utterly conservative about social issues such as divorce and homosexuality (of which he was rumoured to have said "I thought men like that generally shot themselves"); he was also said to have remarked, "My father was frightened of his mother, I was frightened of my father, and I am damned well going to see to it that my children are frightened of me". What was not to like?

But he had also evolved into a benevolent rôle as Father of the Empire; his Christmas Broadcasts over the wireless (from 1932 until 1935, a month before his death) spoke to every nation, people, colour and creed under British imperial sway, and he was deeply conscious of the importance of the Royal Family's public image.

So his negative response to Edward's request for permission to marry Rosemary can be understood: her descent from the first Duke of Sutherland would have alienated at least half the people of Scotland; her mother's marriage to (and separation from) a previously divorced homosexual, and her uncle's notoriety as a libertine, alcoholic and reckless gambler, would have prejudiced her in the eyes of the Church (both established and nonconformist) and the Court. George is said to have liked and admired Rosemary, and the decision must have been painful for him – and it infuriated Edward. According to Lady Paget, one of Rosemary's confidantes, "The Prince was bitter and furious. I don't think he ever forgave his father. I also felt that from that time on, he had made up his mind that he would never make what might be called a suitable marriage to please his parents."

And of course he certainly never again courted anyone who was both single and suitable. The die was cast, and he immediately took up with Freda Dudley Ward.

Rosemary was philosophical, as by then she was in any case much more inclined towards William Ward, Viscount Ednam, later 3rd Earl of Dudley,1,  2 whom she married on 8 Mar 1919.

George V had to read the Riot Act again a couple of years later, in April 1920, instructing Edward's younger brother George (aka Albert, or Bertie, just as Edward was aka David) to curb his infatuation with the married Australian socialite Sheila, Lady Loughborough, and it seems that she might have been two-timing him with Edward, who presumably got warned off at the same time. George had the good fortune to meet his future wife, the sensible Elizabeth Bowes-Lyon, soon afterwards, but Edward continued to sow his oats with Freda Dudley Ward.

So what, you might ask, same old same old. The interesting point (to me at least) is that the delightful Sheila St Clair Erskine (née Chisholm) was Rosemary Leveson-Gower's cousin by marriage. "What goes around comes around". And either one of them could have become Queen – but would either of them have had the stamina and fortitude in wartime and the endearing fondness thereafter for horseracing and Gordon's Gin that made Elizabeth such a national treasure as first Queen and then Queen Mother? The Great British Public just love a flutter and a tipple.

George V's dying words were (reputedly) "Bugger Bognor" rather than "How goes the Empire?", but his enduring personal legacy was quite plausibly his veto of Edward and George's inappropriate marital inclinations. It isn't so much Manners as The Missus that Makyth Man.