The story according to the Stoke Sentinel 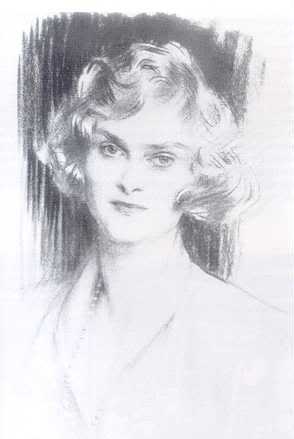 You asked for information on Rosemary Ednam. My wife and myself have spent some time visiting monuments and houses belonging to the Duke of Sutherland.

[...] Rosemary and her husband's gravestones [...] are situated in a private cemetery at Himley Hall belonging to the Earls of Dudley. Her young son John is also buried there.

Born in 1893, the daughter of Millicent and the Duke of Sutherland, she inherited her mother's smile and charm. The Prince of Wales had been attracted to her during his visits to Himley Hall, and marriage had been a possibility. Later, Rosemary confided to a friend that she was glad she hadn't married him.

She was in love with Viscount Ednam, the son of the second Earl of Dudley of Himley Hall, and they were married in 1919 at St Margaret's, Westminster.

There were three children: William Humble David, John Jeremy and Peter Alistair. Jeremy (born 1922) was killed by a lorry at the junction of Albert Bridge and Chelsea embankment on December 9, 1929 when his cycle went off the pavement.

On July 21, 1930, Rosemary was returning to Himley from Le Touquet in an air taxi when it crashed at Meopham in Kent. All on board were killed. Her funeral took place at Himley on July 25, 1930. After the funeral, Duff Cooper wrote a poem which Millicent framed and kept on her dressing table.

Millicent was distraught and built the orthopaedic hospital at Hartshill in her daughter's memory. The drawing of Rosemary was moved when the orthopaedic was demolished and is now in the waiting room of the new site at the City General.

THE pretty girl in the picture could easily have been Queen of England. She was Lady Rosemary Leveson-Gower, daughter of the Duke and Duchess of Sutherland, of Trentham Hall.

Long before Mrs Wallis Simpson appeared on the scene, Lady Rosemary caught the eye of the Prince of Wales, briefly to reign as King Edward VIII. In 1918, the heir to the throne fell in love with Rosemary and made a proposal of marriage.

History might have been very different had his father, King George V, not opposed the match. The King had no objection to Lady Rosemary, in fact he was rather fond of her, but he disapproved of her mother, Millicent, Duchess of Sutherland. The widowed Duchess, a famed society hostess, had remarried but was separated from her second husband. That was enough to make Rosemary an unsuitable bride for the Prince of Wales, although not nearly as unsuitable as the bride he finally chose.

It's said that when she was told of the King's objections, Lady Rosemary declared that she had never wanted to marry a prince in the first place. Instead she married Viscount Ednam, a close friend of the Prince of Wales, although she remained on affectionate terms with the future king for the rest of her short life.

After her marriage to Viscount Ednam, she took over as the enthusiastic president of the North Staffs Cripples Aid Society, which had been founded by her mother. In 1929 she launched a £20,000 appeal for a new outpatients' department at the Hartshill orthopaedic hospital.

But a year later, Rosemary was killed in an air crash in Kent at the age of 36, and when the extension was opened by the Prince of Wales himself in1931, it was said that he left the building with tears in his eyes.

In the book Royal Feud, author Michael Thornton claims the Dowager Lady Hardinge of Penshurst, whose husband was at that time assistant private secretary to George V and later private secretary to both Edward VIII and George VI, said when writing of Edward and Rosemary:

"... he wished to marry ... but there was opposition to the match ... One can wonder forever how the history of our monarchy in the 20th century and after would have turned out, if the Prince of Wales had had his way in those early days."

Lady Rosemary Millicent Sutherland-Leveson-Gower was the youngest of four children born to Lord Cromartie, the eldest son and heir of the third Duke of Sutherland, and his wife Millicent St Clair-Erskine.

It was during the summer of 1917 when Edward, the Prince of Wales, then aged 23, met and fell in love with Rosemary when she was working as a Red Cross nurse in France.

In Royal Feud, Thornton also quotes from Lady Victor Paget, one of Rosemary's closest friends, as saying of Rosemary: "One day she came to see me and told me that the Prince had asked her to marry him."

When his father, King George V, announced he was against the match, Lady Paget expressed that, "The Prince was bitter and furious. I don't think he ever forgave his father. I also felt that from that time on, he had made up his mind that he would never make what might be called a suitable marriage to please his parents.

It may be a coincidence but Edward never courted anyone single or suitable after Rosemary. All his later relationships were with married women.

Lady Rosemary went on to marry William Ward, Viscount Ednam (and later 3rd Earl of Dudley), in 1919 and had three sons. Their home was at Himley Hall on the outskirts of Dudley.

However, one of these, John Jeremy, died in December 1929 at the age of seven when hit by a truck while riding his bike.

It was while returning from visiting her husband, who was in Le Touquet, France, for the benefit of his health, that the plane, a Junkers W33, that she and five others were in, crashed at Meopham in Kent on the afternoon of July 21, 1930.

In a strange twist of fate, the pilot, Lieutenant-Colonel Henderson, an experienced aviator, had written a book, A Complete Course of Practical Flying, which was published on the morning of the tragedy.

An eye-witness account was given by Harold Ward of Leylands Orchard, Meopham: "When I first saw the aeroplane it appeared to turn over and nosedive. Then things that looked like small aeroplanes came from it.

"I thought at first it was a big aeroplane with small ones round it. The objects seemed about the size of a penny when I first saw them. I did not realise what they were until they fell lower, and then I saw they were human bodies. The wing of the aeroplane then parted and floated in the air like a piece of paper."

The bodies were taken to a makeshift mortuary in a stable at the King's Head at Meopham Green. It was here that an inquest was begun two days after the crash. The Duke of Sutherland attended and formally identified his sister. The inquest verdict was death from severe injuries through falling from an aeroplane which broke up in flight.

Despite an intensive examination into what caused the crash itself, no single factor could be found to blame and the reason still remains unknown.

Memorial services for Rosemary were held a few days later at St Margaret's, Westminster, and at Dornock Cathedral and Golspie parish church.

The Duke of Sutherland and Viscount Ednam received messages of sympathy from the King and Queen and other members of the Royal Family.

In Dudley, close to her marital home, the maternity hospital was re-christened in her honour.