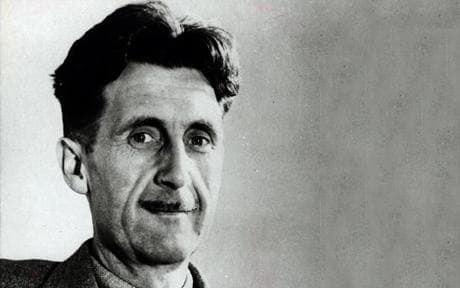 The tall, thin, well-spoken man who spent the evening in the Cardigan Arms at Bramley in early 1930 did not make a good impression.

"Don't bring that b****r in here again," the landlord told his brother-in-law, a civil servant called Humphrey Dakin, who lived just down the road in Hough Lane, and was giving the visitor an introduction to working class life in Leeds.

The Eton-educated outsider, unaccustomed to the North and its ways, did not shine on these occasions. He was, said Dakin, a "skeleton at the feast" and struggled to pass the time of day with their fellow drinkers.

But what he could do was write - and work obsessively. He stayed in Bramley for three months. On most evenings he would finish dinner, chat awkwardly for a few minutes, then go upstairs and type throughout the night. Many years later, Humphrey Dakin's children would recall the noise of the "tap, tap, tappety tap" as their uncle wrote and wrote.

The visitor's name was Eric Blair. The book he was trying to write described his experiences living on the breadline as a casual restaurant worker in France. He called it A Scullion's Diary. Three years later, it was published under the new title Down and Out in Paris and London, the first book by an author who had also acquired a fresh identity – he now called himself George Orwell.

Sixty-six years after his death, Orwell is recognised as one of Britain's greatest 20th century writers. His final two novels – Animal Farm and 1984 – are among the best-known in the English language. Famously, he requested in his will that no biography of him be produced, an injunction that has been broken many times, but which has helped to hide the full story of his family connections with Leeds and Yorkshire.

George Orwell's elder sister Marjorie was born, like her brother, in India, where their father worked for the Indian Civil Service. The children came back to Britain in 1904 and settled in Henley-on-Thames.

It was here that Marjorie and Orwell first met Humphrey Dakin, her future husband and his future brother-in-law, who later came to live and work in Leeds.

Dakin was not impressed by Orwell, remembering his first impressions of him as "a rather nasty little fat boy with a constant grievance".

His verdict did not improve with time. In a much later interview with the BBC which was never broadcast, Dakin portrayed Orwell as a feckless personality who shirked his share of domestic tasks.

"I often wondered what the clue to Eric's character was," he said. "Rather diffidently I put forward the theory that he disliked his fellow men. Intellectually.

"He forced himself to think of his fellow men with compassion. And put on an excellent act, you know, of being a friend of the poor."

Whatever his misgivings, Dakin welcomed Marjorie's problematic brother into their Bramley home in March 1930, escorting him to the nearby Cardigan Arms.

"I tried to get Eric to come to our pub," Dakin remembered. "Even in those years in the slump it was always bright, cosy, and warm, with a big fire going and quite a merry crowd in the evenings.

"From time to time I managed to persuade Eric to come along, but I could never make him join in any game or conversation. "He used to sit in a corner by himself, looking like death, until it was with some relief that we'd hear him say: 'I must go home.'

"Through the window we'd see him walk past on the pavement, wearing a long muffler over a threadbare overcoat and no hat.

"The landlord used to say to me, 'That bloody brother-in-law of yours gives me the willies!' I think he gave everybody there the willies."

Success came slowly for Orwell, but by 1936 he was sufficiently well-established to be commissioned to write an account of social conditions in northern England.

The result was The Road to Wigan Pier, published the following year, which established his reputation as a chronicler of working class struggle.

He set out on foot and by public transport to examine life in Lancashire and Yorkshire. After spending time in Sheffield, Barnsley and Grimethorpe it was a relief to visit his sister and brother-in-law in Leeds, where they now lived at 21 Estcourt Avenue in Headingley, near the county cricket ground.

On March 7, 1936, he wrote in his diary: "Conscious all the while of difference of middle class home, even of this kind, and working class home.

"The essential difference here is that there is elbow room, in spite of there being five adults and three children, besides animals, at present in the house.

"The children make peace and quiet difficult, but if you definitely want to be alone you can be so – in a working class home never, either by night or day."

He also visited the Haworth Parsonage where he said he was "chiefly impressed by a pair of Charlotte Bronte's cloth-topped boots, very small, with square toes and lacing up the sides".

Orwell does not appear to have visited Leeds again, although he did keep in touch with his relatives.

The three Dakin children visited him on the Scottish island of Jura in 1947 where he lived while writing 1984 and struggling against the tuberculosis that would eventually kill him in 1950 at the age of 46.

They had vivid memories of a boating accident when the boat they shared with Uncle Eric capsized in a whirlpool, nearly drowning them all.

They were eventually picked up by a lobster boat, but the children had to walk home for three miles without any shoes. "He was all right because he had his shoes on, but we'd lost ours," Lucy said later. "Typical Eric."

Sixteen years after Orwell's uncomfortable evenings in Bramley at the Cardigan Arms, he supplied an ironic literary postscript.

In a famous article he wrote in 1946, Orwell described his perfect pub, the imaginary Moon Under Water, that "has draught stout, open fires, cheap meals, a garden, motherly barmaids and no radio."

It is a seductive picture, with echoes of the Cardigan Arms. But Orwell must have hoped that the imaginary landlord of the imaginary Moon Under Water would never say of a prospective patron: "Don't bring that b****r in here again."

*The Cardigan Arms in Lower Town Street, Bramley that George Orwell visited was demolished in the 1970s. It was replaced by a new pub, called The Lord Cardigan, which was itself knocked down in 2012. In July last year, permission was granted for eight council houses to be built on the land. Humphrey and Marjorie Dakin's former house in Estcourt Avenue, Headingley still stands.

*The Unknown Orwell by Peter Stansky and William Abrahams (Constable, 1972)