We all make mistakes in life, but few of us on such a literally fabulous scale. It might be tempting to recall mock chat-show host Mrs Merton's barbed enquiry to Debbie McGee as to what had first attracted her to millionaire magician Paul Daniels. But to be fair, Alexandra Tolstoy had previously sampled marriage to a dashing but penniless Uzbek horseman, and the old saying "Been poor, been rich, rich better" now seemed an attractive guideline. And she really really did feel attracted to billionaire Sergei Pugachev.

The BBC TV programme was absolutely riveting on a number of different levels, and I would happily see it again. It was, though, basically a morality tale: Better a cottage where one is merry than a palace where one weeps. And also, implicitly, that the huge disparity in the intelligence of the agonists themselves meant that there could never be a true meeting of minds. 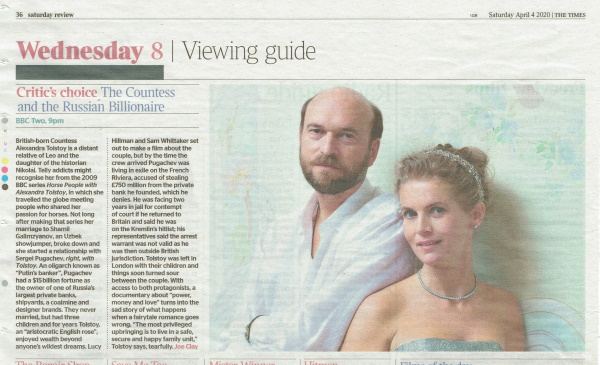 Click here to see the Daily Mail's in-depth account of the programme itself (which also included a glimpse of the historian, biographer, novelist and erstwhile wielder of the sword-stick himself, known rather unfairly as The Unspeakable Tolstoy in Redcliffe Gardens days, Count Nikolai Tolstoy). 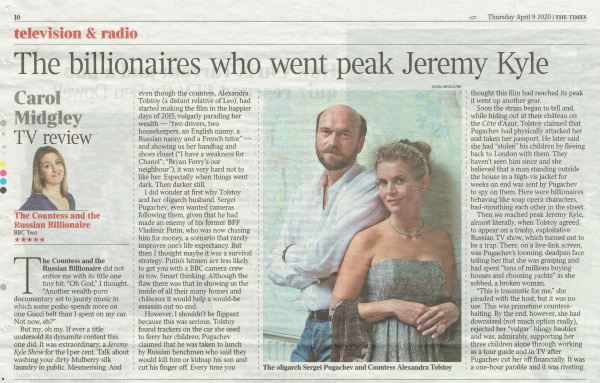 And click here to see The Times' version of events.