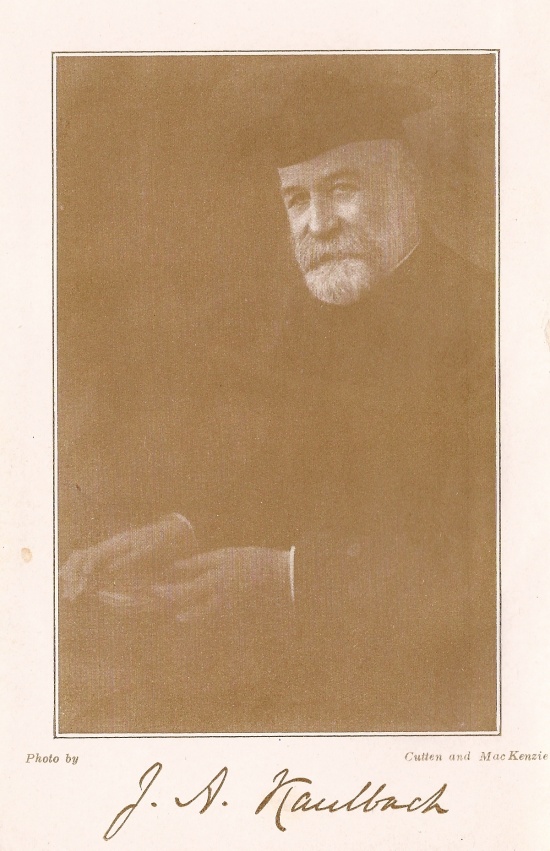 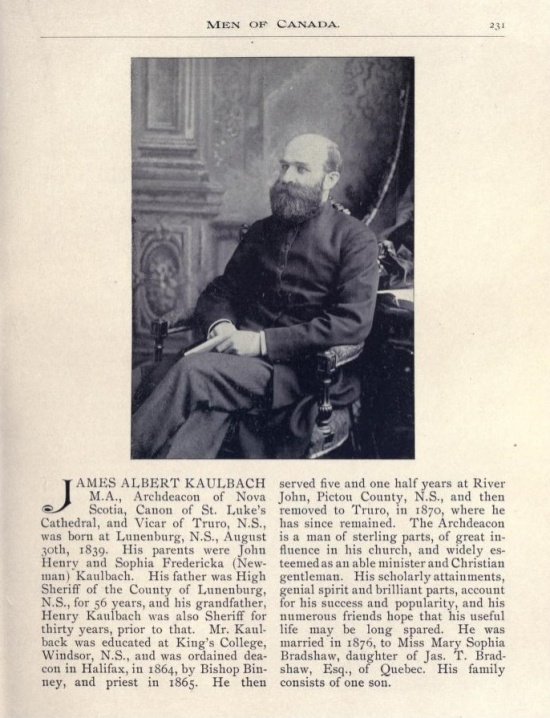 Reproduced from p231 of the following publication 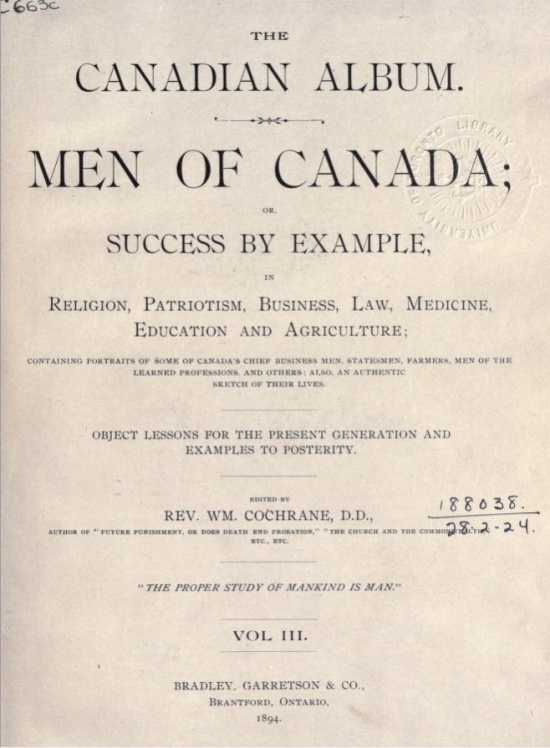 He was born and brought up in Lunenburg, Nova Scotia. Took his Divinity course at Kings College, Nova Scotia. His brother, Senator H A N Kaulbach (my Grandfather), Charles Edwin Kaulbach, Member of Parliament, was another brother, and he had two sisters.

My Great Uncle Edwin Kaulbach was a devoted member of our own beautiful St John's Church (Anglican), Lunenburg. He presented the beautiful chimes to the church, 10-12 bells. The beautiful chancel windows were presented by my Great Grandmother. There are prayer desks etc also donated by our Ancestors. It is the second oldest Anglican church in Canada – St Paul's, Halifax, NS is the oldest.

Archdeacon Kaulbach was a devoted priest, admired, respected and greatly beloved by members of all congregations, many of whom attended his services. He had great compassion for the sick, the lonely and those in need. I know he loved children – so many persons over the years have asked me if Archdeacon Kaulbach was a relation. He is still remembered as one of the outstanding, respected and beloved citizens of Truro, Nova Scotia.

It's a very beautiful old church – I always understood that a part of the font was presented by Uncle Albert in thanksgiving for the safety of Cousin Harry in the Boer War.

You will find the appendices at the back of the book most informative and heartwarming. The Parish Hall is named "Kaulbach Hall" so he is still spoken of by many who never knew him, only knew of the good life he led, [but] word of his works and deeds has passed down to other generations.

She inscribed this letter on the endpapers of a copy of the History of St John's Church, Truro, Nova Scotia that she sent Bill whilst he was researching his family history The Kaulbacks.

Extracts from A History of St John's Church, Truro, NS

I had intended to scan this little book in its entirety – and by 'scan' I mean to obtain just a visual image of each page, and not an electronic textual image. But scanning a book in this (or any other) sense is always fraught with difficulties and disappointments. In this case, the problem was that a purple bloom infested each scanned page of text that I tried, and (less objectionably) that the rather antique photographic illustrations suddenly disported themselves, like aged jades, in intricate tapestries of false colour (pigments of the imagination, one might say).

Fortunately, if you'd like to read this delightful little book from cover to cover, you can find it for sale via the internet. But in the meantime the most important bits for present purposes are reproduced below.

But first a confession of ignorance on my part. Having been brought up in an entirely secular parental household, my understanding of the Anglican hierarchy is still more or less nil. Yours may be too, for that or many other reasons. But Google tells me that deacons in the early Church were messengers (and their name in Greek meant 'through dust', as they travelled along primitive roads and pathways). And archdeacons therefore meant the same, but more so, like angels and archangels.

And today, a Deacon or Archdeacon seems to mean a facilitator or expeditor of Church affairs. Whereas Canons and Deans are more or less wholly concerned with doctrinal affairs and liturgical matters relating to the humble flock whose religious solace the diocese (overseen by the Bishop) takes care of via the Rectors or Vicars of the various parishes within the diocese.

So although Kaulbach was an Archdeacon as far as the Diocese of Nova Scotia was concerned, and a Senior Canon of St Luke's Cathedral in Halifax, Nova Scotia until it burned down in 1905, his day-job between 1871 and his death in 1913 was firstly as Vicar, and after 1903 as Rector, of the Church of St John, Truro, Nova Scotia, an imposing building very little changed from the photograph below: 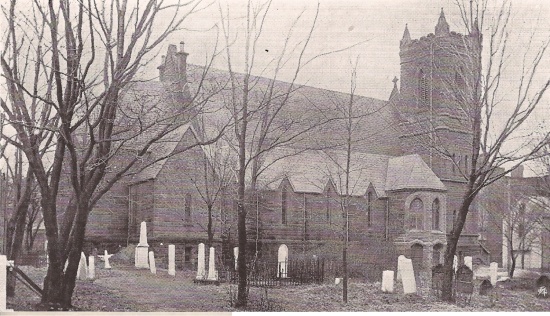 But very different from its predecessor, the pioneering style of which actually appeals to me more than the heavy stone edifice it was replaced by. Curiously enough, when construction of the old church was first mooted, it was counter-argued that "the lands intended for a glebe in the township were irrecoverably lost, and the 'ministerial lot' was already in the hands of Mr Waddell, the Presbyterian Minister". (p 13, A History of St John's Church, Truro, NS) 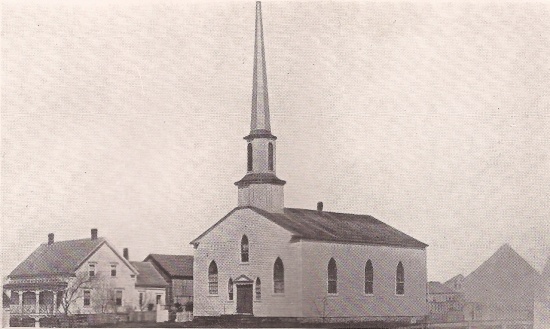 I'll display the opening pages of the book in-line, as they provide immediately helpful information. But click here to see the entirety of Appendix D, describing the unusual circumstances of his death and the numerous heartfelt tributes spoken at his funeral. The rather striking poem given on the final page is by Julia Caroline (Ripley) Dorr. 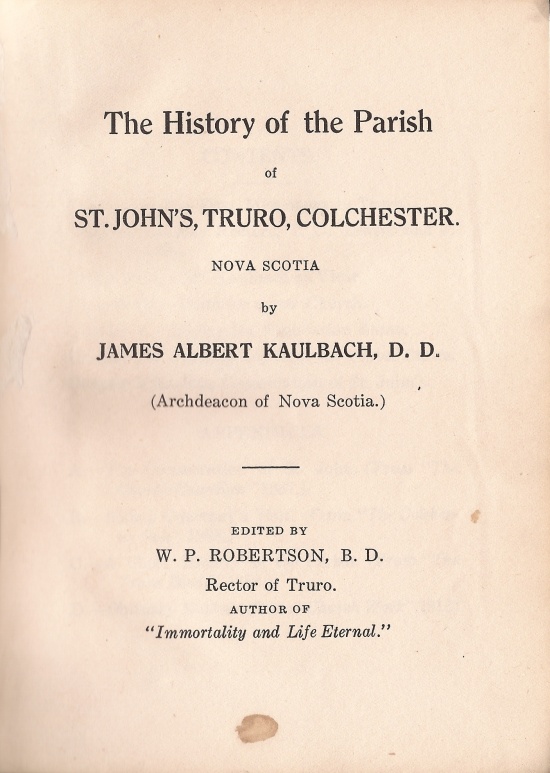 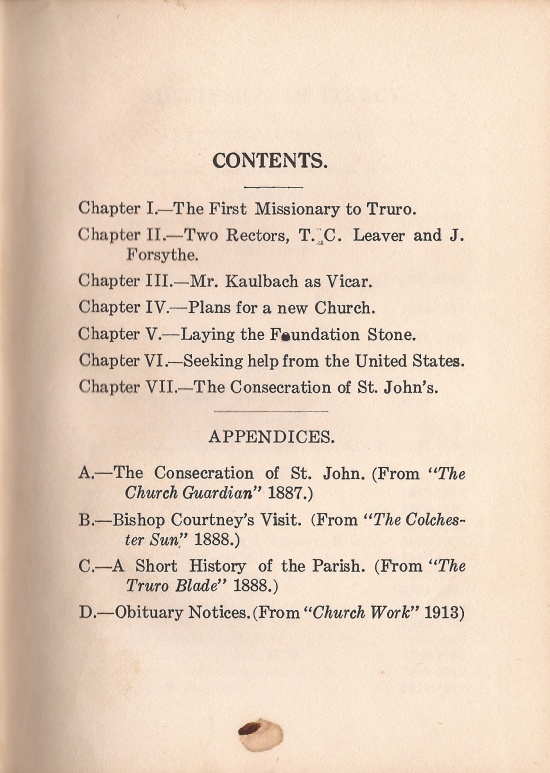 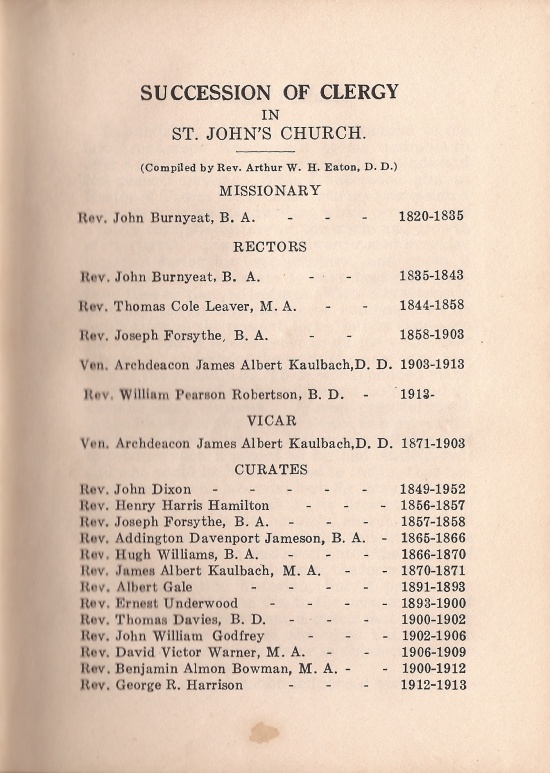 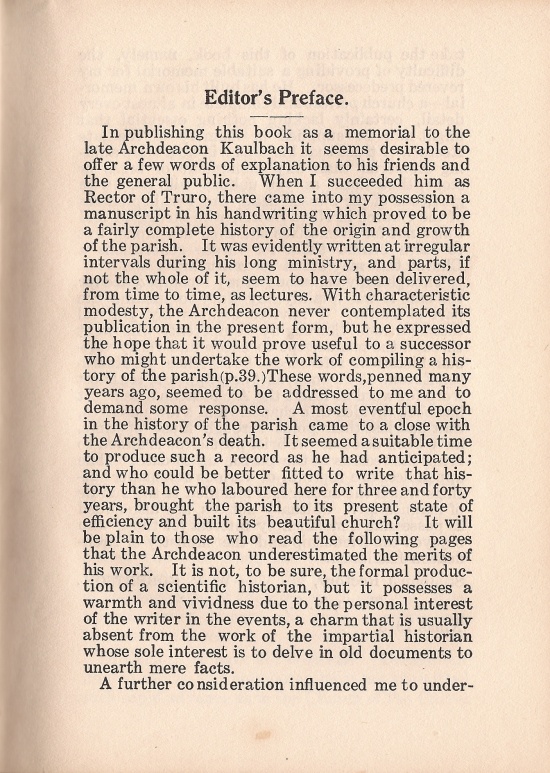 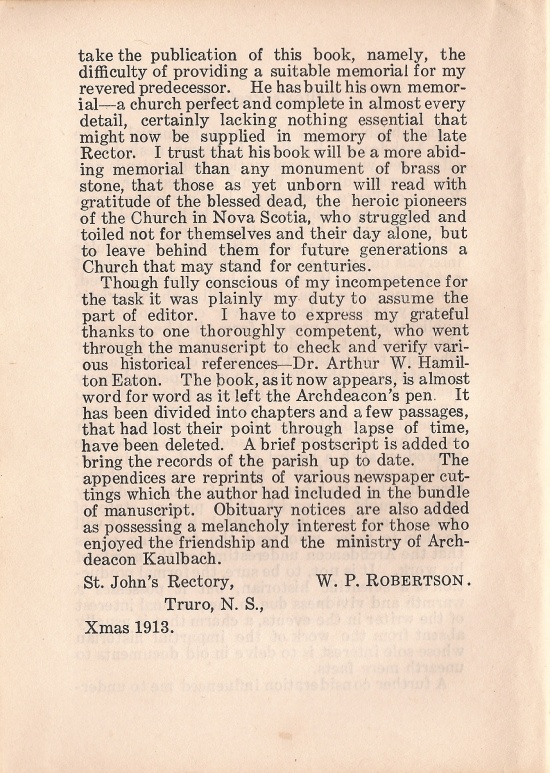