(Note that the spelling of the original family name of Kaulbach was anglicised by Deed Poll to Kaulback on 5 Jan 1922.)

1899-1901 Served in the S African [Boer] War as a regimental subaltern, seeing frequent action. Wounded in the head, and Mentioned in Dispatches, at Battle of Diamond Hill, 11 Jun 1900.

1918 Mentioned in Dispatches for distinguished service.

1926 Posted with regiment to Rawalpindi, India.

In March 1982, my wife and I, together with our two young children, crossed the Atlantic for the first time (only narrowly avoiding the crash of Freddie Laker's cut-price Skytrain fiasco) to stay with her brother Peter and his family in Ottawa. Whilst there we were taken on a visit to the Royal Military College in Kingston, Ontario, and were given a tour of the publicly-accessible College buildings – an unprecedented glimpse into the military world for us. There were a great many historic photographs on display of bygone cadets and officers – amongst the latter being Harry Kaulback himself, still with both arms of course, generally on horseback as befitted his rank.

And outside again, perhaps the most unexpected sight of all was the Adjutant's House (aka Panet House / Maison Panet) in which Ronald and Bill had been born some seventy years previously! The following pictures and text can be seen on the website www.historicplaces.ca/en/rep-reg/place-lieu.aspx?id=11113. 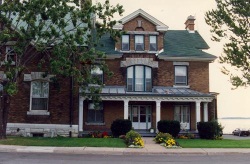 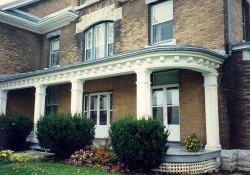 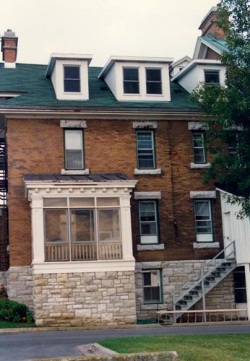 Royal Military College of Canada (RMC) Building 27, also known as Panet House, sits close to the water at the east side of the RMC campus. This two-storey residential structure, designed in the Classical Revival style, is clad in brick with stone and wooden details. The gable roof features a large front-facing, gabled dormer and three shed dormers to the rear. A broad and deep front porch contains the main entrance to the building. The designation is confined to the footprint of the building.

RMC Building 27 is a Recognized Federal Heritage Building because of its historical associations, and its architectural and environmental value.

RMC Building 27 is associated with the theme of military officer training and the emergence of a professional armed force in Canada. The building is also associated with Major Raymond N.R. Reade, a British officer sent to the RMC from London in 1901, who authorized construction of a gymnasium, a hospital, an electrical plant, and a permanent accommodation for the staff-adjutant and his family. The first occupant of the permanent accommodation for staff-adjutant was the notable RMC graduate, Captain H.A. Panet. RMC Building 27 and the other constructions furthered by Reade were intended to improve both educational and program facilities at RMC, and recognized RMC as an institution that produced officers able to serve throughout the British Empire.

RMC Building 27 is valued for its very good aesthetic design. Its design is influenced by the Classical Revival style, with details that make aesthetic connections with architectural precursors at the RMC itself, other defence establishments of the era and region, and contemporary domestic architecture in eastern Canada. The masonry and wooden details are evidence of its quality craftsmanship.