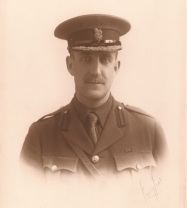 Click here for his biographical details as summarised in his younger son Bill's family history The Kaulbacks.

An Appreciative Tribute to Harry Kaulback the man

Harry Kaulback's whole life was spent in the army. Tall, fair-haired and good-looking, he was the ideal of what an officer should be. His military career took him far afield – in war to S Africa and Flanders – in peace to Canada, Bermuda, India and Burma.

He enjoyed adventure and travel. As a young boy he would escape to the backwoods whenever he could, to explore, hunt and fish with his Micmac Indian [First Nations] friends. Once, he recalled with amusement, he had an unexpectedly abrupt encounter with a skunk, as a result of which his stern Mamma forbad him to enter the house for a week, so he slept in the stables. He became an adept at forest lore and was delighted to have been able on one rare occasion to correct one of his Indian companions out hunting. The Indian hearing a sudden noise and suspecting bear, hissed "Bar! Bar!" and waited for Harry to shoot. He didn't; his sixth sense told him it was a large porcupine – and so it was!

Later, as an officer cadet from the Royal Military College, he crossed Canada and spent a summer exploring and climbing in the Rockies. He never missed an opportunity to explore new lands and when his father died in 1913 and Harry had to return from India to settle the estate, he chose to do so round the world so that he could visit the Far East and Japan on the way.

With wide interests, active, intrepid, loving the outdoors and sport, he indulged in every activity that came his way, whether it was playing rugby for King's College and later the RMC; or riding in the cabs of railway engines as a boy – and actually driving them when his friends the engine-drivers allowed; or climbing in the Rockies; or hunting to hounds in England. He was a natural athlete who could reach the top in any sport he chose to take up. 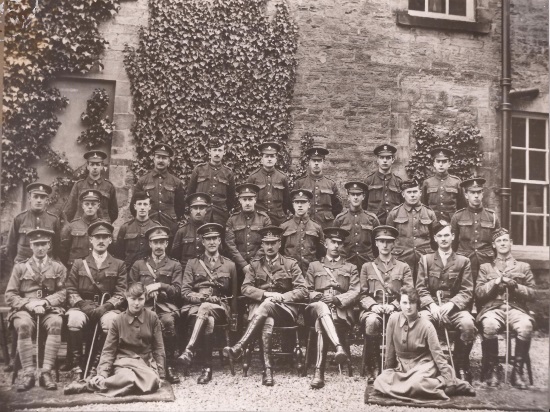 (You don't have to be Sherlock Holmes to spot the officer the left sleeve of whose uniform is hanging from the shoulder ...)

Nor did he allow the loss of his left arm in 1915 in any way to deter him. It became a challenge to be mastered. As soon as he was discharged from hospital he took up hunting again, trained his horses, rode in point-to-point races and played golf just as if he still had two arms. In 1921 he won a show-jumping event in Yorkshire on his favourite gelding Greyboy, and he even taught himself to ski just a year before his death.

He enjoyed soldiering. Clear-thinking and decisive, he was a notable organiser and administrator. It was because of his outstanding abilities of this kind that he was retained in the service, in spite of the loss of his arm, at the time of the 1922-23 axe when the Army officer corps was so drastically reduced in numbers.

In his private life he was full of fun, gentle, affectionate and kind, but he set his personal standards high and expected his sons to do the same. On one hilarious occasion at Hipswell Lodge in Yorkshire which I remember well, it must have been in 1917 when I was six, he engaged in a battle royal with several brother officers; he and a companion defending the first floor landing with chemical fire-extinguishers against a spirited assault from below with similar weapons. Heaven knows who won; all I recall of the aftermath is that repairing the walls was a major undertaking. The acid in the extinguisher fluid had stripped off all the paint. What it did to the carpets, furnishings and their uniforms can be left to ones imagination.

Though far from wealthy, he had assumed the burden of all his father's charities, regularly gave ten percent of his income to the poor, and maintained four orphan boys at his own expense at the Waifs and Strays Homes.

Yet he had a keen sense of practical [realities]. A word of advice that he gave [me] when [I] first went up to Cambridge is memorable. "Now that you will be on your own for the first time, old Juggins", he said, "be careful. There are many pitfalls. If you take my advice, you will restrict your drinks to wine and beer and never touch spirits; don't lend money to a friend; and never put anything in writing to a woman whom you don't intend to make your wife".

His death at the all-too-early age of 51, brought on by the persistent after-effects of the gangrene he had suffered in the stump of his wounded arm, put an end to a most promising career of which he had enjoyed every moment.

An Unexpected Accolade from Anthony Quayle

Sir Anthony Quayle, later a distinguished actor and director, was born in 1913, and was a year below Bill Kaulback at Rugby, who was himself a couple of years below Ron. In his autobiography he recalled the uniquely dramatic impact of Harry Kaulback delivering the Kaulback brothers back to school (after an exeat, by the sound of it) and the unparalleled street-cred they accrued on every such occasion.