Much of the original information in this table was due to Anne Burgess, to whom I am very grateful, and to further googling of (for example) 'Lamberty family Mauritius Edinburgh', which revealed a number of useful posts on the RootsWeb website. There are obvious inconsistencies associated with Ryland's date of birth – the certificate of marriage to Helen Ferguson gives his age at that time as 38, for example.

I am also very grateful to Mark Lamberty, who has corrected and extended much of the original detail in the table below. The website Scotland's People has also proved useful, up to a point, but certificates are frequently unavailable. However, even then, the year of death and age at death indicate the approximate year of birth; these details (for Olive, Norman, Winston, Gladys and May) are shown in orange in the tabulation.

I've also made good use of
www.ancestry.co.uk/family-tree/person/tree/40493612/person/19499330263/facts
via which it was possible to view the Passenger List on two trips to Mauritius made by Henry Gilbert Lamberty plus wife and younger family, the first in 1912 and the second in 1928, as per the links below to the passenger details from the family members involved.

In the medical qualifications mentioned below, the L implies 'Licenciate of' and

Medicine was clearly the life-blood of the family1,  2 – at one point, five were practising GP's – Henry, Ryland and Helen (Ferguson), Gilbert and Doreen – while Norman was a consultant and Winston was a dentist.

The authoritative website Scotland's People has no record of any family births in Scotland other than Ryland, Gilbert and Olive, so it must be assumed that the six younger children were born in Mauritius. For how long they stayed, and where, I'm not sure.

The patriarch William Lamberty was renowned as having 100 slaves and owning a mountain. 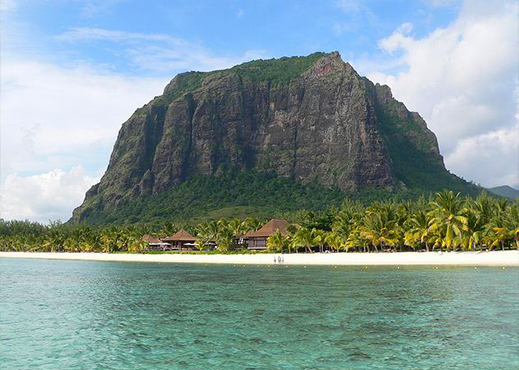 And this rugged outcrop (Le Morne Brabant) might well have been it.

More prosaically, the whereabouts and professional status of the medical members of the family can be traced via the UK Medical Register.

And in 1955 when my parents and my brother and I moved to London, Ryland and Helen became our GPs. My father had known Helen and her hard-drinking journalist brother Jock since their childhood, but Ryland was an entirely new experience – 5'5" at most, mahogany brown with dark wavy hair, a throaty French accent, and luminously intelligent eyes. To me, Ryland was like a visitor from another planet - I'd literally never seen a 'foreigner' before – and Ryland set a standard never again approached let alone surpassed. He was very dynamic, and could be overpowering, almost, but invariably kindly.

There was a third partner during the era in which I used to occasionally be taken to see 'Uncle' Ryland or Cousin Helen for some youthful ailment or other, a second generation Pole called Max Skoblo, who had trained at St Bartholomews Hospital, aka Barts. Bald, plump and pale of mien he was slightly unprepossessing, and even to my eyes he always seemed rather downbeat.

According to my father, Max and his mother had escaped the Holocaust by reaching England somehow, though knowing no English at all to start with. After he'd been at school for a little while, his birthday became imminent, and his mother determined to provide a really special birthday party to invite his whole class to. She had scrimped and saved and bought the invitation cards and all the provisions for the tea. In the early afternoon of his birthday, young Max waited excitedly for the first guests to arrive. And waited and waited. And waited. But nobody came. He had forgotten to hand out the invitations to his classmates.

I still think that's one of the most poignant stories I've ever heard.

Something else I heard in that same era was that Max was a soft touch when his patients wanted uppers, downers, tranquillisers, pain-killers, anti-depressants and all those other things for which the pharmacist needs a GP's prescription before dispensing to the customer. The NHS paper-trail is officially monitored, but complicity between GP and the dispensing chemist can stay under the radar, though evidently not for ever:

A Kilburn pharmacist was found guilty at the Old Bailey this week of plotting to defraud the Brent and Harrow Area Health Authority over forged prescription forms.

Mr Sidney Frankel, who had premises in Willesden Lane and lived in St John's Wood, North London, had denied conspiring to defraud the authority by the presentation of forged prescription forms and falsely representing the description and quantity of medicines prescribed by doctors Barry Michaels and Max Skoblo and dispensed by him to their patients.

Earlier, Mr Daniel Hollis, prosecuting, had told the jury both doctors had pleaded guilty to similar offences and would be sentenced later. Mr Frankel was bound over on bail to come up for judgment after the Easter recess.

Mr Hollis said Mr Frankel and the doctors agreed that Mr Frankel submitted forged forms to obtain money for goods which had never been prescribed or dispensed. He said the offences, committed between November 1976 and September 1977, involved only a small amount of money. "We are looking at something like £50 per person throughout the period we can prove".

A pharmacist and two general practitioners were jailed at the Old Bailey for defrauding the National Health Service. Mr Sidney Frankel, a pharmacist from St John's Wood, London, was jailed for 30 months and ordered to pay prosecution costs up to £5,000. Dr Barry Michaels and Dr Max Skoblo were each jailed for 18 months.

The three defendants were charged with conspiring to defraud the health authority by presenting forged prescription forms falsely representing the description and quantity of medicines. The general practitioners had pleaded guilty and Mr Frankel was found guilty at the Old Bailey last month (C&D April 5, p556). Judge Gwyn Morris said to Frankel: "You were an essential party in this fraud. Without you it could not have been operated. Unlike the doctors you lacked the courage to acknowledge your obvious guilt. You committed perjury and sought to deceive the jury but they had no difficulty in recognising you as an utterly contemptible fraud."

This sort of malarkey happened years after Helen's death and Ryland's retirement. But while I was still at school Ryland had put forward a bizarre scheme to my father that was presumably part of a strategy to eliminate Max Skoblo from their practice.

William, like my mother, had absolutely no idea as to what I was doing (or more likely neglecting) at school, but like so many people of his generation he was convinced that strings needed to be pulled in order to outmanoeuvre the opposition. Ryland put it to him that I should become qualified in medicine, preferably at Edinburgh, of course, and could then become a partner in the lucrative Camden Town practice with himself and Helen.

Oblivious of having told my form-master 'Chalky' only the year before, that I would take over the PowerTyping "family" business in due course (an idea indescribably alien to me anyway), and that Chalky had thereupon persuaded me to give up Biology in favour of History (a swap which certainly found favour with me), William eagerly unrolled this red-carpet prospect to me. Not since the South Sea Company prospectus had anything quite so obviously doomed to disaster ever been conceived or promoted.

But the switch to History had entirely unanticipated benefits, as I was therefore obliged to take Applied Maths in the Sixth Form (rather than Zoology and Botany) and was unexpectedly entranced by the topic of celestial mechanics, inter alia, with consequences that resonate to this very day.