I'd guess that the sturdy lad in this portrait would have been about 11, putting his DOB at about 1712. 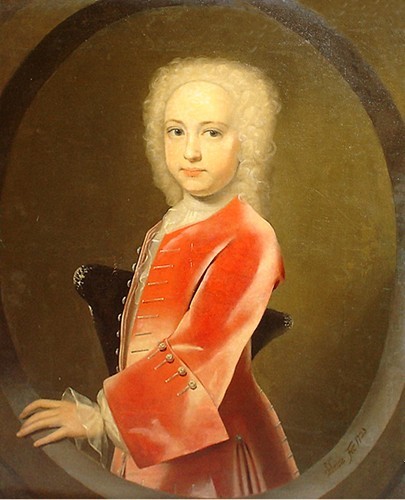 Not very much is known about this particular Hewling Lewson, and is mostly due to his somewhat brief involvement in porcelain manufacture, which was however continued with great success by others. I'll string together a number of internet vignettes to convey the story as best I can.

Sir Charles Saunders, K.B., a gallant Vice-Admiral, who for his distinguished services was much honoured by his Sovereign, and respected by his country ... purchased this estate in 1762, of Hewling Luson, Esq., who resided at the old Hall, adjoining the churchyard. ...

In 1756, Hewling Luson, of this parish, Esq, [had] erected a temporary furnace upon his estate here, and succeeded in establishing a china manufactory, something superior to Delft ware. In the following year the project was revived by Messrs. Aldred, Richman, Walker, and Brown, at Lowestoft; who established a very respectable manufactory, upon a more extended scale, but it has long since been relinquished.

According to Gillingwater, the historian of the county of Suffolk, the Lowestoft factory was established under remarkable and romantic circumstances. It is said that a certain Mr. Hewlin Luson had befriended a shipwrecked Dutch mariner, and had taken him into his house until such time as he should be able to return to his own country. On walking over his estate one day, accompanied by the sailor, the latter noticed some clay which had been newly turned up, and remarked to his host, "They make Delft-ware of that in my country." Acting upon this hint, Mr Luson essayed to make porcelain, but soon relinquished the attempt.

A year later a factory was founded at Lowestoft by [Messrs. Aldred, Richman, Walker, and Brown], at Lowestoft.

Hewling Luson was the son of a Lowestoft merchant, William Luson, and inherited the Gunton estate about the end of the 1740s. Alfred Suckling, writing in 1847, states that he came into the estate in 1749, but an insurance policy seems to place the date as before 1748. Gillingwater's account of his abortive pottery experiment seems reasonably accurate, but there is no actual indication of the whereabouts of the clay deposit, or indeed whether this is the one used later by Lowestoft Porcelain. Nevertheless his account forms the basis of our knowledge of events today.

By October 1761 Hewling became bankrupt and the estate was sold to Sir Charles Saunders. It is very unlikely that Hewling had any connection with Lowestoft Porcelain, although he clearly knew his tenant, Philip Walker, who became the principal of the firm. Hewling remained in Lowestoft until at least 1765 when the Manor Roll records that "Robert Luson was admitted to the Fish Houses in the occupation of Hewling Luson, late of Gunton and now of Lowestoft" and according to Gillingwater was one of the town's herring boat owners. By 1777 Hewling had moved to Bethnal Green and died there. 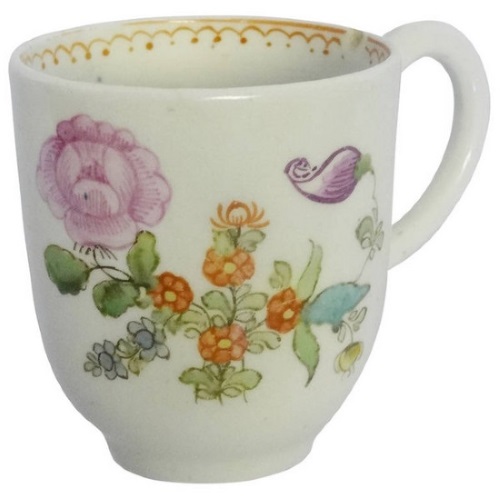 In 1756 Hewlin Luson Esq found clay on his Gunton estate which, after it was analysed in London, was reported to be akin to Delft ware. However, his early attempts to produce porcelain ware were unsuccessful and, about one year later, a partnership which did not include Luson was formed to establish a company.

By January 1760 the company was ready to advertise its wares in the Ipswich Journal and records show that the porcelain produced at Lowestoft was highly successful, being advertised as far afield as London and Cambridge. It is also possible that some ware was exported to Holland.

During the life of the factory, a range of items were made, from birth tablets to spittoons. Although the vast majority of the ware falls within the category of everyday household items, things such as eye-baths, inkwells and cutlery handles can also be found among catalogue entries. As well as the distinctive blue and white hand-painted ware, the factory produced pieces with enamel decoration and transfer printing, though these were to come during the middle and later periods, and probably contributed to the decline in hand-painting.

We know that Thomas Walker, one of the latter partners, wrote a will stating that the factory was to "continue for sixteen years from October 1785 and then cease". The termination of the business was therefore planned and production gradually ceased, until finally the factory closed down somewhere between October 1801 and early 1802.

But happily this was not the end of the story ...

Lowestoft Porcelain shut down in 1802, the result of a plan to withdraw from the market by ageing owners who were tired of the exercise - only to re-open 198 years later.

Peter Knight, a Lowestoft businessman operating Peto Craft, brought the firm back to life when in the year 2000 he set up "Lowestoft Porcelain 2000" to make porcelain in the style of the old Lowestoft ware, as well as later more modern forms. The firm was opened officially on Mothers' Day 2001 with premises partly in London Road South (the old Peto Craft premises) and partly at the "Kiln" at the Peto Gallery, but then expanded and moved to Redgrave House, Battery Green Road. The implication of the name of the house will not be lost on students of Lowestoft Porcelain!

Many heritage shapes were produced; tea bowls, teapots, cutlery, Sparrow beak creamers, Loving Cups, Water jugs and the famous Birth tablet. He gave many local people opportunities to be creative and to grow in confidence , but sadly Peter died in December 2011. It was expected that this might be the end of the venture - but not so!

Sally Rivett, the proprietor of "Your Coasters" has worked with and alongside Lowestoft Porcelain for 8 years and her interest and love for china continues to grow. She has now been given the opportunity to keep this historical name and certain products in production and will continue to work with local talented artisans, one of whom, Colin Challis has also been busy painting his second set of highly popular bird beak jugs which are also available to buy through Sally at info@yourcoasters.co.uk as well as creamers of the traditional type.