I can find virtually nothing via the internet about the remaining 32 years of his life, though I think he first moved to Glasgow. He died in Girvan, however, the Ayrshire coastal town where his son Peter Hately Waddell had founded the 'Church of the Future' in 1843, so perhaps he and his second wife Alice (née Hately) had removed there too.

There are hints of a sort from Census records of 1851 and 1861 that Alice (plus daughters Alice and Agnes) might have lived there after his death, she finding some sort of livelihood as a tutrix or schoolmistress. 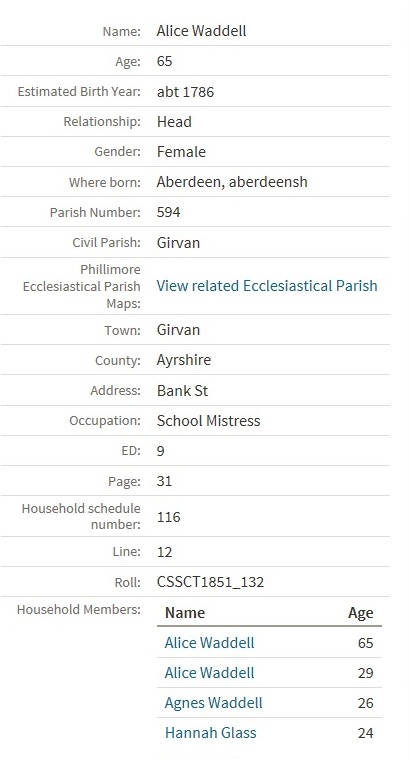 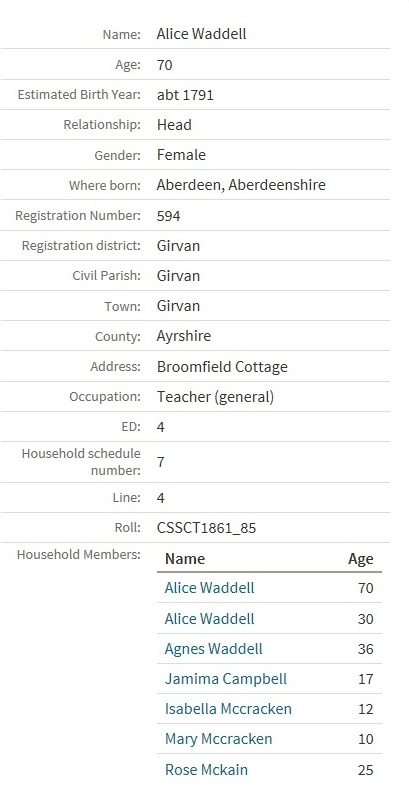 (perhaps Jemima and the young McCracken sisters were resident pupils, though of course Rose was almost certainly a domestic servant)

There are obvious external discrepancies and internal inconsistencies as to the ages of Alice, Alice Jr and Agnes. Must this whole idea therefore be abandoned?

As the relentless utilitarian Gradgrind asseverated, "Facts alone are wanted in life", but where the facts are wanting, I think that speculation must supply the deficiency, though from my schooldays onwards I've often been quite severely reproved for such naivety. But the great Einstein was once asked, What if [Eddington's] observations should disagree with his theory [of General Relativity]? He replied, "Then I would feel sorry for the good Lord. The theory is correct."

Not all of us are blessed with such magnificent self-assurance, and I'm quite willing to hear that these records relate to someone else entirely, but they're the best I can manage with the resources available to me, imperfect though they obviously are.