"They muck you up, your Mum and Dad, They may not mean to, but they do," as the poet Larkin so nearly put it.

And the first thing they so often muck up is their choice of name, or names, for you. Forenames, that is.

It may not be so in other countries, where religious tradition or state legislation restricts parental choice. But in Britain, unless the proposed names are clearly blasphemous, obscene or self-evidently offensive, almost anything goes – just think of the Geldof / Yates / Hutchence progeny Peaches Honeyblossom, Fifi Trixibelle, Little Pixie, Heaveny Hiraani Tiger Lily, or Luscious Tropical Mango April Fool, all of them genuine except possibly that last one.

And to be honest, children can also be cripplingly embarrassed by names they see (or the other children in the playground see) as soppy, stuffy, weird or dated. It took me half a lifetime to become reconciled to Robin (soppy) or Robert (stuffy), let alone Erskine (weird and old-fashioned)! If only somebody had revealed to me that three of those early Erskines had been beheaded for murder I'd have revelled in the name.

Scottish tradition does actually prescribe the choice of Christian names for your children, from their parental and grandparental names, but this practice gradually fell into disuse during the nineteenth century.

So how did Jane's parents fare, when born in the 1880's? Her father was Robert, plain and simple, whereas his elder brother was given the much more ornate family names Peter Hately. Perhaps there was a degree of nominal determinism in that Robert became a dour hands-on engineer while Peter Hately rose effortlessly through the university system into the ICS. Rather far-fetched, I agree.

Jane's mother was Jessie Frances Hannah. She detested her first name, and I only became aware of it as a previously-unsuspected initial on a cheque she sent me in my early teens. (At that time her as-yet unmarried daughter Frances Hannah was living at home and without that 'J' the Midland Bank would easily have become confused between them.) When crossing and re-crossing the Atlantic during 1912-1916 she always gave her name on the Passenger Lists as Frances, and to her husband and friends she was always Hannah.

So how did Robert and Hannah's own children fare as regards the names bestowed on them? Jane herself mused on this, though significantly skipping her own instance, in a note she made to my brother Simon, though it was never sent. 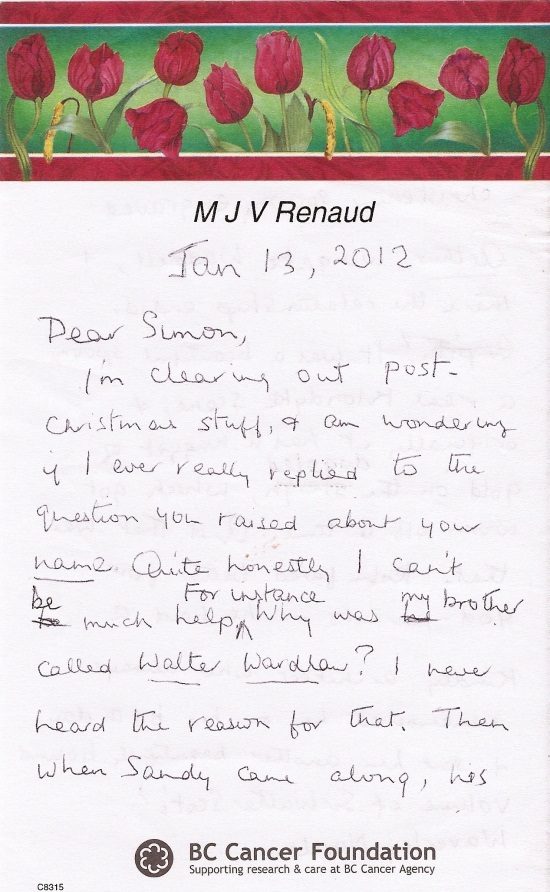 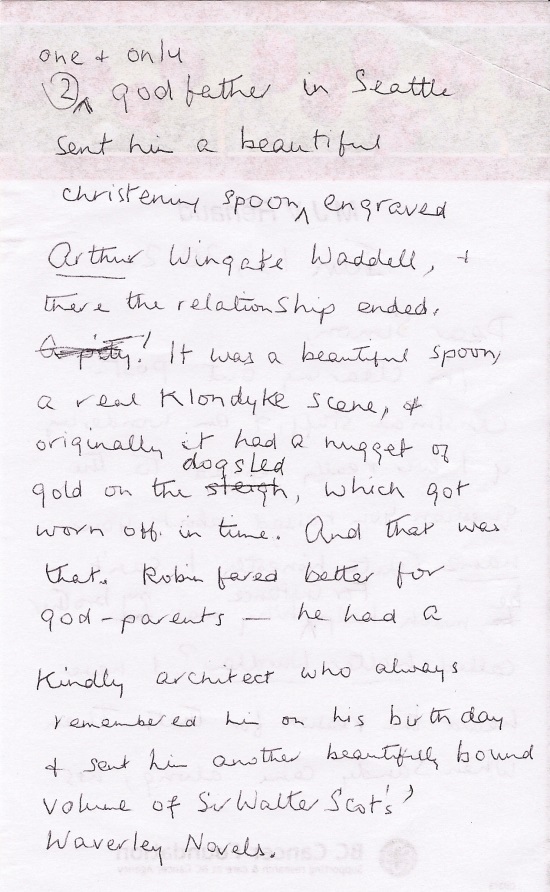 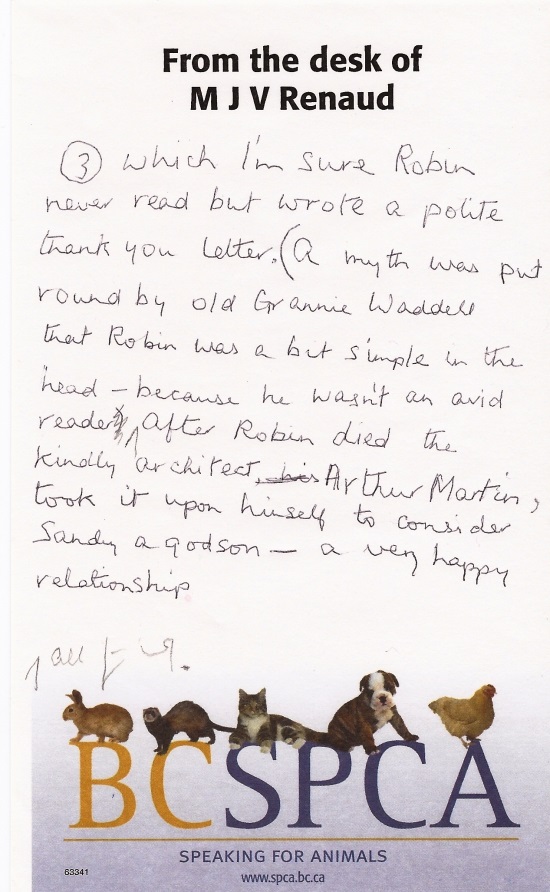 Interesting, of course, but not terribly informative.

Jane's eldest brother (my father) Walter Wardlaw loathed both his names, and as already detailed elsewhere, took to the name William in middle-age, though his family obstinately stuck to Walter. In this note, Jane remarks on the obscure origin of Walter's names. It all revolves around his great grandfather Rev Peter Hately Waddell Sr (PHW), whose wife's maiden name was Wardlaw and youngest son was Walter (dying at the age of 25).

PHW's youngest brother was Robert (who died in childhood as did all PHW's siblings), not a great omen for my grandfather, uncle (died at 22) or myself, all of that name!

Jane next eldest brother was Robert Erskine (the one who died suddenly at 22). Nobody seemed to think that Robert was appropriate, as he was always called Robin – a diminutive of Robert, as well as being a name in its own right.

Jane's third eldest brother was Alexander Wingate. Alexander, a good old Scottish name, abbreviated easily enough to Sandy, but nobody has any idea whatsoever as to the origin of Wingate. But at least it was euphonious, and didn't cause any problems.

Jane's older sister Frances seems to have been totally relaxed about both her names, despite the slight datedness of Hannah. Frances itself is a lovely name, of course.

But poor Jane! I was well into adult life before discovering that she too had an extra initial both fore and aft (the 'M' emerging first, the 'V' a good few years later), she being Margaret Jane Valentine. Margaret was in honour of Robert's mother (who however was always known as Rita, at least in her younger days – later on, she morphed into Old Grannie: just a touch of Mowsle Barton!) and the Valentine was almost certainly a placatory gesture towards Hannah's elder sister Val. But at least the family had respected her own preference, and I think she'd been Jane from an early age. Interestingly, however, as one can see from those personalised notelets, she'd become reconciled to the full set of parental choices in her later years.