The area variously known as the Trucial States, Trucial Oman, Trucial Omani States, Trucial States of Oman, or Gulf States, but nowadays (since 1971) as the United Arab Emirates (UAR), has a long and complex history. From the early 19th century until 1971 it was effectively a British protectorate, and the British were instrumental in maintaining its integrity against the depredations by the kingdom of Saudi Arabia, its vast southern neighbour. The neighbour to the east is the Sultanate of Oman, and to the west are the peninsular emirate of Qatar and the island kingdom of Bahrein. Further still along that coastline lie the emirate of Kuwait, and the exceedingly short coast of the disputed battleground that was once the kingdom, and then dictatorship, of Iraq.

Along the coastline on the northern side of the Gulf is the theocratic tyranny of Iran, once and more poetically known as Persia, and previously ruled autocratically but benevolently by the Shah, Mohammad Reza Pahlavi (who was deposed in 1978), but now a pivot of what US President George W Bush justifiably demonised as the Axis of Evil.

It seems to be a matter of personal choice whether to call the gulf Arabian or Persian, but 'Persian Gulf' is nowadays said far more often than 'Arabian Gulf'. Though both Arabs and Iranians are Muslim, the former are predominantly Sunni and the latter are overwhelmingly Shia, and their mutual hatred is well known.

Abu Dhabi is by far the largest and Ajman the smallest. Perhaps Dubai is now the best known, certainly for its extravagant opulence. In each and every emirate the population is overwhelmingly concentrated in its eponymous capital city. From the very helpful diagram below, it's evident that several of the emirates consist of quite scattered territories. 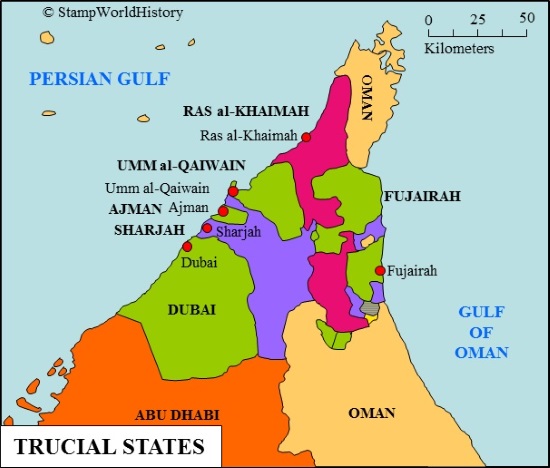 Click here and then zoom as appropriate to see all the surrounding geography, and indeed as close-up as you like, but for convenience I've taken two snapshots which show the littorals of (firstly) Abu Dhabi and (secondly) the other emirates. 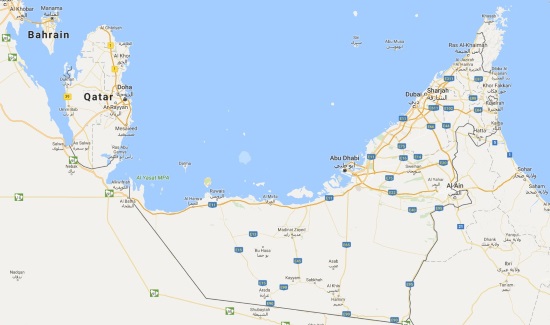 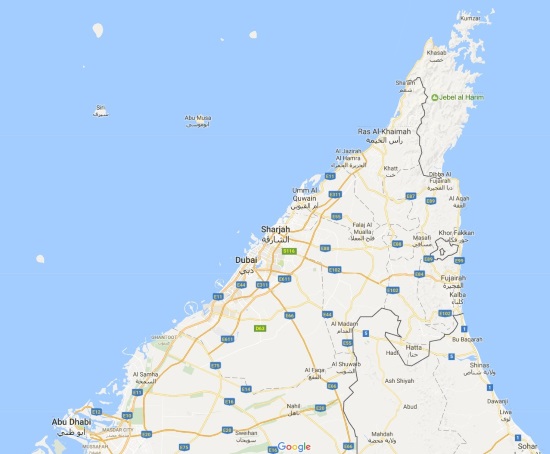