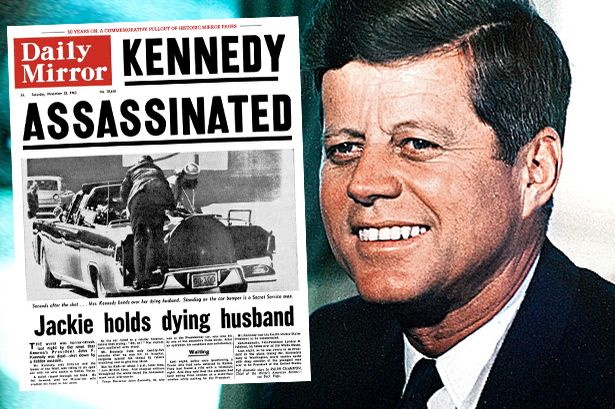 The world was horror-struck last night last night by the news that America's President John F Kennedy was dead - shot down by a hidden assassin.

Mr. Kennedy, only forty-six and the leader of the West, was riding in an open car with his wife Jackie in Dallas, Texas.

A bullet ripped through his head. He fell forward, and his 34-year-old wife cradled his head in her arms.

As the car raced to a nearby hospital, Jackie kept crying: "Oh, no!" Her clothes were spattered with blood.

Mr. Kennedy lived only twenty-five minutes after he was hit. In hospital, surgeons opened his throat to relieve breathing and to give him blood.

But he died - at about 1 pm, local time, 7 pm British time. And shocked millions throughout the world heard the announcement soon afterwards.

Texan Governor John Connally, 46, who was in the Presidential car, was also hit by one of the assassin's three shots. After an operation his condition was satisfactory.

Last night, police were questioning a Texan who had once defected to Russia. They had found a rifle with a telescopic sight. And they said that the assassin had been eating fried chicken at a sixth-floor window while waiting for the President.

Mr. Kennedy was the fourth United States President to be assassinated.

Automatically, Vice-President Lyndon B Johnson, 55, takes over at the White House.

Last night, as he was sworn in as President in the plane taking Mr. Kennedy's body to Washington, world leaders spoke with deep emotion of the youngest man ever to be President of the United States.

As President Kennedy today slumped dying in his car, shot through the head by a sniper's bullet, his wife Jackie cried: "Oh, no!"

She cradled him in her arms during the five-minute drive to hospital through shocked, surging crowds. Her clothes were spattered with blood from her husband's wound.

President Kennedy was shot at 6.35 pm British time as he was driving through Dallas, Texas, along a route lined, with 250,000 people. He died at 7 pm, 25 minutes after he was shot.

He never regained consciousness. The last rites of the Roman Catholic Church were given by two priests in the hospital.

Vice President Lyndon Johnson, 55, was sworn in as the new President while flying back from Dallas to Washington - on the plane that took Mr. Kennedy's body to the American capital.

Meantime, doctors at the Dallas hospital were operating on John Connally, 46, Governor of Texas, who was also shot in the President's car. He was wounded in the chest. Tonight his condition is satisfactory.

Police seized a man - in a cinema in Dallas - a man, they said, who screamed and brandished a pistol as police closed in.

Dallas police said the man - Lee Oswald, 24 - was arrested in connection with the killing of a police officer shortly after President Kennedy was assassinated

He was also questioned about the President's death. But he denied any connection with either of the killings.

Oswald was said to have defected to Russia in 1959 and announced that he wanted to stay there.

He is understood to have applied for Soviet citizenship. But last year he returned to his home in Texas, with his Russian wife and their baby girl.

Oswald is now believed to be chairman of a "Fair Play for Cuba" committee.

Police Officer M McDonald, who helped in the arrest, alleged that Oswald said: "Well, it's all over now."

Oswald is said to have worked in a building where a rifle was found. Police who entered a sixth-storey room in the building found a rifle with a bullet in the breech, and three spent cartridges lying beside it.

There was also a pile of chicken-bones - the killer apparently had a meal before he shot the President.

The shooting drama which shocked the world came when Mr and Mrs Kennedy were halfway through a three-day tour of Texas to rally support for the Democratic Party and for a second term for the President.

Dallas is a centre of right-wing politics, and the President's Civil Rights policy to give equality to coloured people has been opposed there.

The shooting took place as President Kennedy's procession neared a bridge leading towards the Trade Mart, where Mr Kennedy was due to address a lunch of businessmen.

Senator Ralph Yarborough, a Democrat from Texas, who had been in the third car behind the President, collapsed into sobs as he told how he saw the President killed.

Charles Brehm, 38, who was 15ft away when the President was shot, saw him waving to the crowd.

Then came the sound of the shots, and a stricken look crossed Mr. Kennedy's face. He fell on to the back seat.

A television newsman said tonight that he looked up at the sixth-floor window of the Texas Book Depository, after the shots were fired, and saw a rifle being withdrawn from the window.

After the shooting, the Presidential motorcade broke up as Mr Kennedy and Governor Connally were rushed to hospital.

An operation was performed to assist Mr. Kennedy's breathing. An oxygen machine was used and blood and fluid also were administered.

Dr. Malcolm Perry, 34, said: "There was an entrance wound below his Adam's apple. There was another wound in the back of his head."

Some of the ten doctors who fought to save the President said it was possible that just one bullet entered the throat - then went through the back of the President's head.

Mrs. Kennedy was in the hospital all the time. Those who saw her go by said she had not been hysterical but was crying bitterly.

The President's body was taken in a bronze coffin from the hospital to the airport. Mrs. Kennedy went with it.

Also in the plane on the flight to Washington, were Vice-President Johnson and the President's brother, US Attorney General Robert Kennedy.

President Kennedy's body will lie in state at the White House tomorrow.

The funeral will be in his home town of Boston. The two Kennedy children, Caroline, 5, and John, nearly three, have so far not been told of their father's death, a White House spokesman said.

John will be three next Monday, and the Kennedys had planned a big birthday party for him.