I have now (Sep 2019) found a connection. It's a page from the 1939 England and Wales Register, a (partial) emergency survey (as war with Germany loomed) of British adults, their addresses, personal details and occupations. 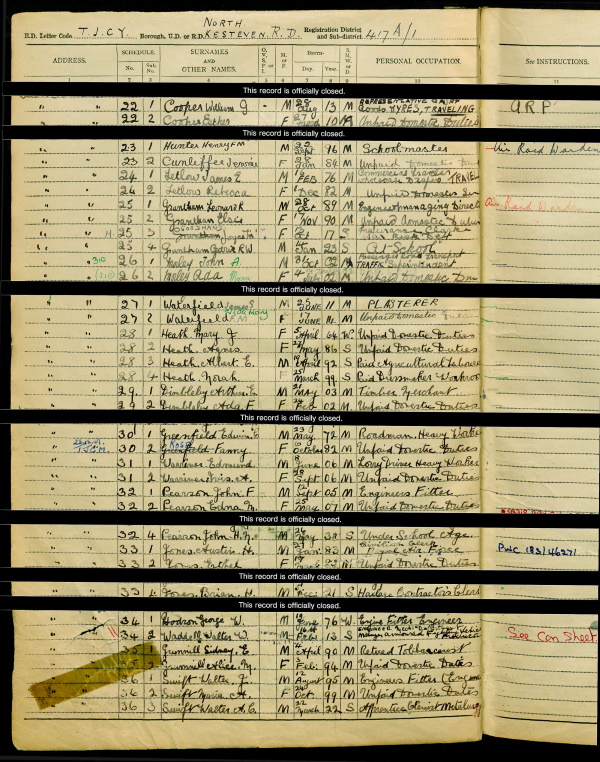 Under the heading "Personal Occupation", William is recorded as

in the Rural District of North Kesteven, almost totally surrounding the city of Lincoln, in which Rustons Engineering was based.

It would be interesting to see what "See Con Sheet" refers to, but above all, we can appreciate that at the relatively tender age of 26, he is in charge of such a major responsibility (in an era when age and experience were valued far more highly than youth and ability). And furthermore, the category of armoured fighting vehicles would surely include tracked vehicles such as tanks. His father Robert by this time was a consultant working for London-based Campbell & Gifford but travelling widely. Robert's mission was to set up major new facilities for production of super-hardened steel suitable for tank-tracks and turret-guns. Their interests, for a while at least, were running in parallel.

(This image is dated Jul 1940, just a month after the evacuation from Dunkirk, and I'm not sure that this innovation would have had the Führer suing for peace)

At about this time William was also romantically involved with a young woman called Dorothy, who eventually married a (reputedly) alcoholic Norwich solicitor, surnamed Forsyth. He (William) did have a motorbike for a while, so on quiet East Anglian byways he could have commuted quite long distances. He once told me that he'd had a skid and ended upside down in a ditch with the bike on top of him, and that was that for him and motorbikes.

But Katie (William's future first wife) was PA to Alan Good (in Glympton Park, Oxfordshire) who was mastermind of a large industrial manufacturing conglomerate, and it was there that William and Robert converged for a brief but fateful period of time, as recounted in that link.

Dorothy would feature significantly some fifteen years later, however.