A few years before he died in July 1907, James Waddell committed to paper this summary of the ancestral primogeniture of his family. I think he must thereby have found solace for his declining health and indifferent record of personal achievement, despite his undeniable abilities and sustained effort in life. Well, I can resonate with that, and I would like to shake him by the hand across the interval of more than a century since he set pen and ink to two sheets of foolscap and in his best hand, without the benefit of anything save careful forethought and a steady eye, completed this document word-perfectly.

It came down to me as four unequally sized photocopies – possibly originating from U Sandy – which I recently found in a box in our garage and scanned into electronic form – it's just a bit mildewed in places, for which I apologise (unfortunately the discolouration is intensified by the increased contrast level necessary to make the scanned text more legible): 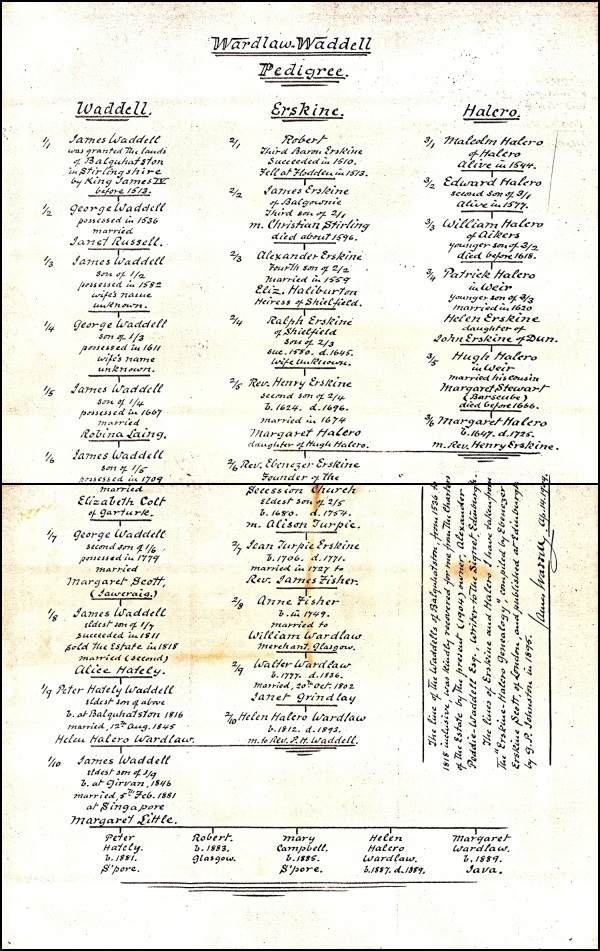 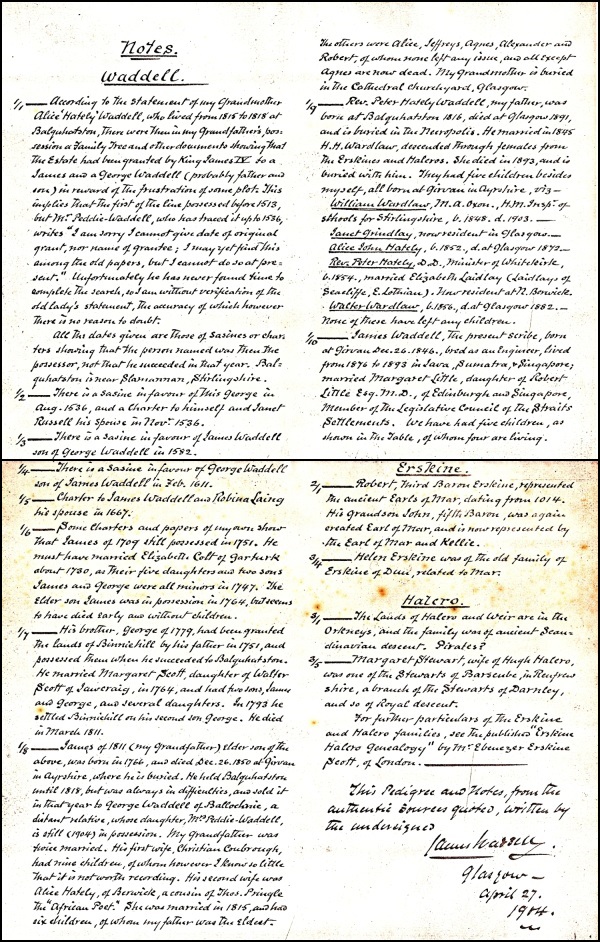 The contents of the Pedigree as regards the Waddell family can be summarised as follows. The Generation Number (#) is reckoned backwards from Gt Grandfather James at -3. The ordinal in the next column is the individual's sequence number assigned by James on the document and has no other real significance, as we shall see. The 'possession date', as he explains, is taken from the sasine (Scottish equivalent of title deed, roughly speaking), which simply states that the person named was in possession 4 at the date stated, not that he succeeded at that date.

There was an Old Man of Slamannan

Before going any further, I'd like to draw attention to a page from ref 1, which innocently contradicts the central section of this table in several important particulars (I apologise for the unusually poor scan-quality): 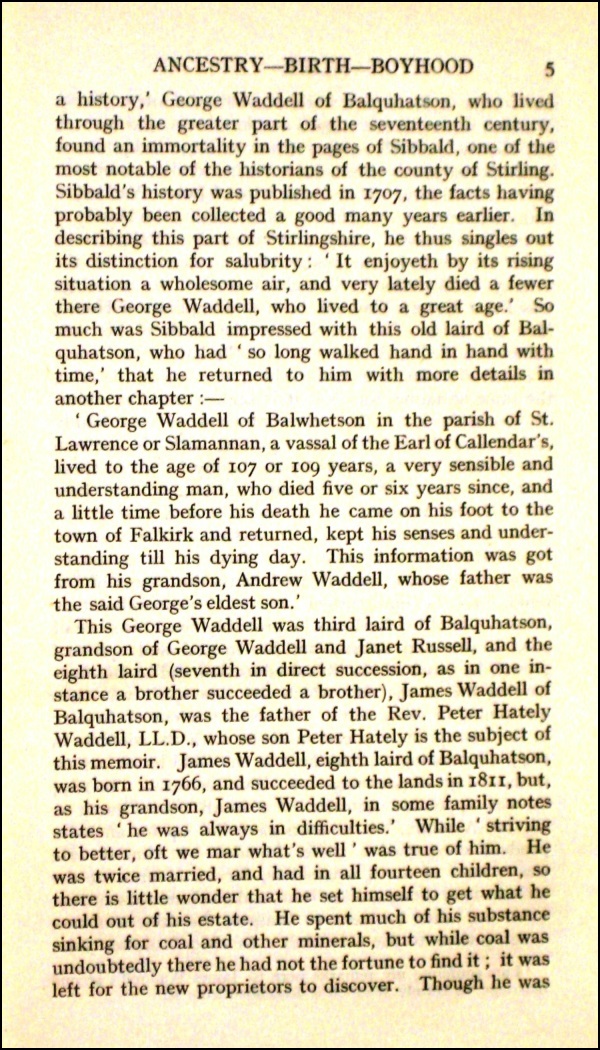 Let's pick up on each point in turn

The Laird and the Lassock

As mentioned in passing on p 43 of ref 2, Elizabeth Colt was born in 1701 and subsequently married James Waddell (1709) of Balquhatstone. So that fits reassuringly with the Pedigree, except that she was only credited with a family of two boys and three girls, whereas in The Balquhatstone Connection we will see a further five children indicated. These were almost certainly infant deaths or puir dwaiblie bairns that lived but a few years.

Likewise, but in somewhat more detail on p 144 of ref 3, Elizabeth's birth, christening and marriage are described, with the same family of two boys and three girls being credited to her. However, the chronicler goes on (pp 144 - 145) to recount a picaresque tale of how Elizabeth's elder brother Robert was bamboozled by his young serving girl (lassock) who had been bribed by young James Waddell, Robert's future brother-in-law. Suspecting these habitual pranksters of yet another practical joke at his expense, and determined to take good-humoured revenge, Robert pursued James and another rowdy young Waddell through the streets with his drawn sword, and on catching them up gave them both a salutary drubbing. Gosh, they certainly knew how to have fun in those days!

Cutting to the chase, how closely does the Pedigree tie-in with the Balquhatstone section of U Sandy's Waddell family tree, which after all was based on this Pedigree in the first place?

Pretty well from 1 to 4 inclusive, and from 7 to 10 inclusive – in those ranges the names and (no further than 8, of course) the sequence numbers are the same.

One does get the feeling that Sandy in particular had rather gone walkabout as regards the period 1659 – 1764, and could feel surprised that he didn't give a clue in his annotations as to why he decided to depart from James' script.

But perhaps the evidence was too scanty or too equivocal, perhaps he ran out of time and energy in this area of his massive undertaking. Life is full of unintentional loose ends and this was possibly one of them. And the ancestors involved were pretty obscure anyway – maybe they deserve to remain each in his narrow cell for ever laid.

There is a particularly memorable passage – well, it has stayed with me for forty years or so – in Somerset Maugham's Of Human Bondage, in which the hero, or protagonist at least, Philip, has a brief but intense vision of the intrinsic dignity of being simply a transitional link in the unfolding of human generations. He realises that this in itself is a validation of ones existence, regardless of any personal distinction that one may, or not, achieve in that brief timespan, or indeed of any degree of emotional or ambitious fulfilment.

Not dissimilarly, Winston Smith in 1984 committed to his diary the thought that despite the ongoing awfulness of that dystopia, the totalitarian nightmare would eventually be outlasted simply by the irrepressible fecundity of the 'proles'. Not a politically-correct word to use these days, and rightly so, but of course its origin lies in the Roman word for lowly but decent people with a healthy birthrate.

And while I'm in ruminative mode, I'm often struck by the disparity between myself and my forebears – how incredibly smart and energetic they generally were, whereas I all too often fail to match up to those qualities. And yet my standard of living (not to be confused with quality of life) is immeasurably higher than theirs. For a very long time this has troubled me – what right do I have to enjoy better food, health, education, personal comfort and indeed lifespan than them? Civilisation get smarter (though not wiser) exponentially, whilst Joe Bloggs, T C Mits (The celebrated man in the street), Everyman, et al, are quite unable to match this, just bobbing up and down in each successive generation.