The Assassination of Franz Ferdinand

The concept of the Incident Pit is impressed on all trainee scuba divers, in the UK at least, and is brilliantly encapsulated by the verse quoted in the very interesting and readable account reproduced below.

I know that the above item is a bit corny but it gets the message across that sometimes events can be set on their course by the slightest of items, often with considerable flow-on effect.

So it is that much of the history of the 20th and 21st centuries can be attributed to a simple sandwich.

The assassination of Archduke Franz Ferdinand led to the outbreak of WW1, which in turn created the Weimar Republic and its economic failure. Those conditions resulted in the election of Adolf Hitler and the outbreak of WW2. The war and the development of nuclear weapons caused the Cold War and the polarisation of the east and west. That in turn resulted in the Vietnam War, the US's training of Osama Bin Laden and the subsequent terrorist attacks by Bin Laden.

So how does the humble sandwich fit into that?

Franz Ferdinand (1863-1914), whose death precipitated WW1, was an Archduke of Austria-Hungary and Prince of Hungary and Bohemia. He was also the heir to the Austro-Hungarian throne. 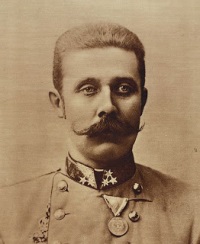 The Austro-Hungarian Empire at the time included Serbia, Bosnia, Croatia and Bohemia, which was a cause of unrest and rebellion amongst dissident elements.

One such revolutionary movement was Young Bosnia, composed mainly of ethnic Serbs but also including Bosnians and Croats. A secret military group which developed from Young Bosnia was the Black Hand.

Gavrilo Princip was a member of both organisations, a fervent nationalist and one of the several members of the Black Hand selected to assassinate Franz.

After numerous bungles, cancellations and problems with securing weapons, it was intended to kill Franz during a visit by Franz and family to Sarajevo. The bungles by the assassins were matched by the bungles of the official party and security. 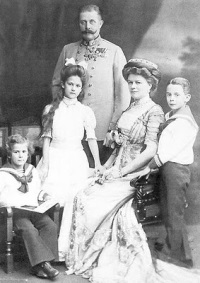 On 28 June 1914, a motorcade of 6 open topped cars proceeded from Sarajevo Station to a military barracks for an inspection, from where it was to go to the Town Hall for a reception. The itinerary, times and route had been publicly announced beforehand.

Franz Ferdinand and his family were in the second car in the procession.

Seven conspirators lined the route, with instructions to seek to kill Franz as he passed by. The first conspirator, Muhamed Mehmeddbasic, lost his nerve and then there were six. The next conspirator along the route, Nedeljko Cabrinovic, threw a hand grenade but it deflected off Franz's car. The driver had seen the object thrown and had also accelerated. The grenade had a ten second delay and blew up the third car as the car passed over it. Cabrinovic swallowed a cyanide pill and jumped into the nearby River Miljacka to kill himself. Unfortunately for him the pill was expired and only made him sick. The river was 13 centimetres deep. He was hauled out by the crowd, beaten and handed over to the authorities.

Then there were five. Because of the high speed of the Archduke's car and the heavy crowds, they were no longer able to carry out any further assassination attempts. They scattered in various directions, including Gavrilo Princip.

From here the story becomes more bizarre. Against the advice of pretty much everyone there, Franz Ferdinand, a decent chap, decided to visit the wounded in hospital. On the way, Franz Ferdinand's driver took a wrong turn into Franz Josef Street, driving past Gavrilo Princip who was at Moritz Schiller's café having a post attempted assassination sandwich. 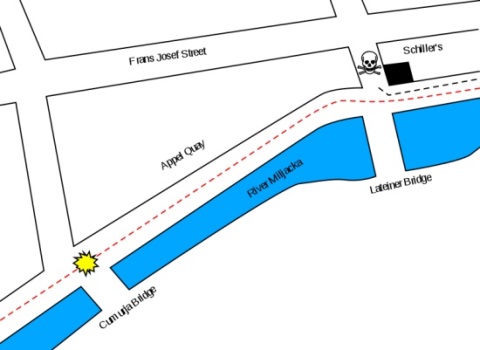 When Ferdinand's driver realised his mistake, he braked and began backing up. In so doing, the engine stalled and the gears locked. Presumably after uttering the Serbian equivalent of "WTF??", Princip regaiuned his composure and fired two shots into the car. Ferdinand was hit in the jugular and his wife, Sophie, who covered her husband's body with her own after the first shot was fired, was hit in the abdomen. Sophie was dead on arrival at the Governor's residence, where they were driven for medical treatment. Franz Ferdinand died 10 minutes later.

Princip also tried suicide by cyanide but his pill came from the same batch as Cabrinovic's. It too only made him sick. Although he also tried to shoot himself, the pistol was wrestled from him by bystanders. He too was beaten up and then handed to the police. Too young to receive the death penalty, being aged 19, he was sentenced to 20 years gaol, where he died in 1918 from tuberculosis. At his sentencing, Princip had stated that he had intended to kill Governor Potiorek not Sophie. 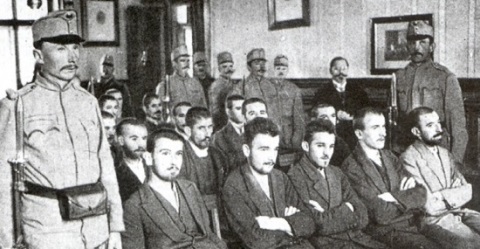 History does not record the filling of Princip's eventful sandwich at Moritz Schiller's café.

Austria-Hungary used the assassination as an excuse to move against Serbia and eventually declare war. Because of the numerous treaties in place, most European major countries were drawn into the conflict.

So did Princip cause the Great War and the general ghastliness of the century that has followed? The aleatoric viewpoint says he did, since if he hadn't, unbroken peace, prosperity and progress might well have continued to prevail indefinitely.

However, the Austro-Hungarian government and military had reputedly been itching for an excuse to have a go at trouble-making Serbia, and Russia itself, and it's ironic that Franz Ferdinand himself had consistently counselled against such a course of action, for fear of the very consequences that did indeed ensue after his murder.

That the European incident pit had already passed the point of no return, was expertly propounded in The Times recently (p31, Fri 27 Sep 2013), and one can think of any number of assassinations from Julius Caesar onwards that were either futile (Spencer Perceval, Abraham Lincoln, John F Kennedy, Robert Kennedy, Indira Gandhi, Yitzhak Rabin, Benazir Bhutto, and that's without even checking Wikipedia, except for the spellings, of course!) or else superfluous to what the Spinners of Destiny had in mind anyway.