Tales from the frontline: Mark Goodliffe

Mark Goodliffe has won The Times Crossword Championship 11 times, 10 of them consecutively, and is the only person so far to have held its Sudoku Championship at the same time – not once, but twice 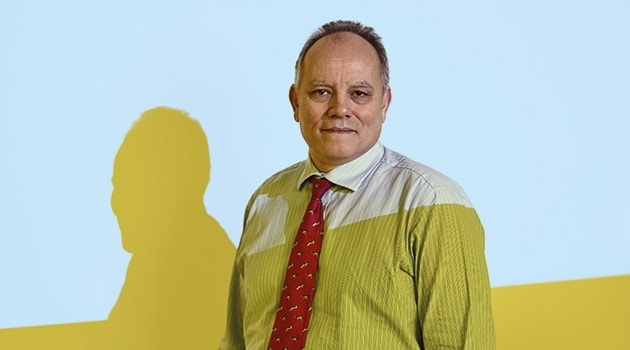 I still remember the day when I first completed The Times crossword. I was 17 and in the library at boarding school where I used to while away the time with the broadsheets, working out how to answer the cryptic clues either myself or by getting the next day's paper to see what the solution was. Everyone in the house said you should get a prize for completing it and I had to explain that wasn't how it worked.

By the time I went to university, I was solving the crossword fairly regularly and getting really interested – so much so that, when I was 19, I actually went to a Times competition to watch. When I was 21, I entered a championship qualifier and came nowhere – 50th perhaps – and I realised that although my speed wasn't bad, my ability to finish harder puzzles wasn't great.

I didn't think about it for another 10 or 11 years. I was busy qualifying as a chartered accountant at Stoy Hayward (now BDO) and then pursuing an enjoyable career in the City as a finance director. I used to play cricket at weekends throughout the summer and I was very unwilling to give up those days to attend a championship where I didn't expect to do well. That turned out to be a good decision because by the time I did go back, I had become really fast and considerably better at finishing. I was still error prone though.

In 1996 and 1998 I made mistakes that prevented me making it into the final. Just one word errors – one letter wrong in each case, but any error, however small, kills you because you will always end up behind whoever completes the crossword correctly, however long they take. Then in 1999, the championship was held all on one day for the first time. I turned up and won the London heat and then the final, which was quite a shock for a lot of people.

I'd never been in a final, I wasn't a known contender, I wasn't in the inner circle. My pride was short-lived though. In 2000 I made an error in the final and lost again. It wasn't until 2008 that I finally hit my winning streak. I won 10 championships on the trot. I may hold the record but I've worried over the years that some people thought I was being ungentlemanly to keep competing. John Sykes, who was the previous record-holder, famously won it 10 Times but he missed doing it consecutively because The Times started asking him only to compete every other year. I did talk to The Times and other competitors and they didn't agree with that policy.

But I did meet people who asked me why I didn't let other people have a go. Well, last November I made a serious error and I did lose. Not deliberately, I hasten to add. An error is possible all the time. In a way, the oddity was that I managed to finish 10 years of six puzzles correctly. That would be much more than my general daily ratio. Obviously I'm concentrating more in the final and I did feel a bit annoyed with myself that I hadn't given this clue a bit more thought. But I would probably have still gone with the same answer unless I'd given it five or six more minutes' consideration. But you don't have the time. In the heats, my policy is to recheck that every answer I've written is what I meant to write but in the final I just check that I've filled every square because at any moment somebody else might beat me to it and declare.

It's not an official record but I once did a Times crossword in two minutes, 35 seconds, which even by my standards was extreme. The chap who held the official supervised record won the championship back in 1970. He was interviewed on the radio after the event and they suddenly handed him the day's crossword and said “Do that. We're timing you”. He did it in four minutes 30, which is very impressive especially for a Saturday puzzle in The Times at that time.

And nobody's ever challenged that. I may have won The Times Sudoku championship twice [he is the reigning Times Sudoku champion] but it's very different from crosswords: there are two or three people in the UK who are better than me and I'm not likely to surpass them at any point. But I do like trying to get in the four-man UK Sudoku team – which I've done for the past five years. Last year, I finished 40th in the world, which I was very happy about. As for The Times Crossword Championship, now that I've lost, I feel I can go back and compete without any qualms. So all being well, I'll be back again later this year.