Sir James Dodds was evidently a man after my own heart, of no mean intellect, who did his job so well that nobody ever saw the need to promote him. Like his son-in-law Peter Hately Waddell, he had been educated at the Universities of both Glasgow and Oxford. He well deserved his prominent entry in Walford's County Families. 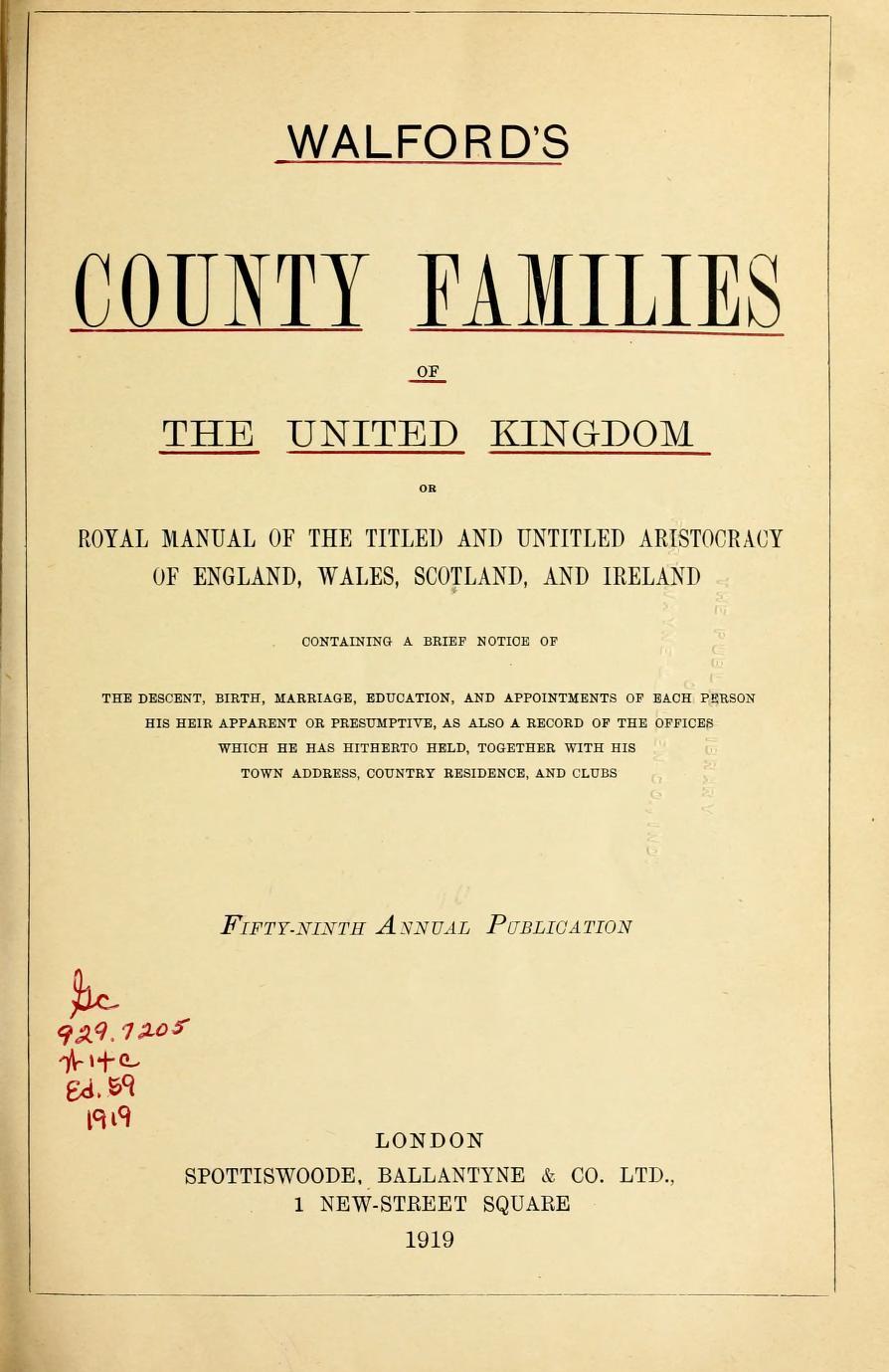 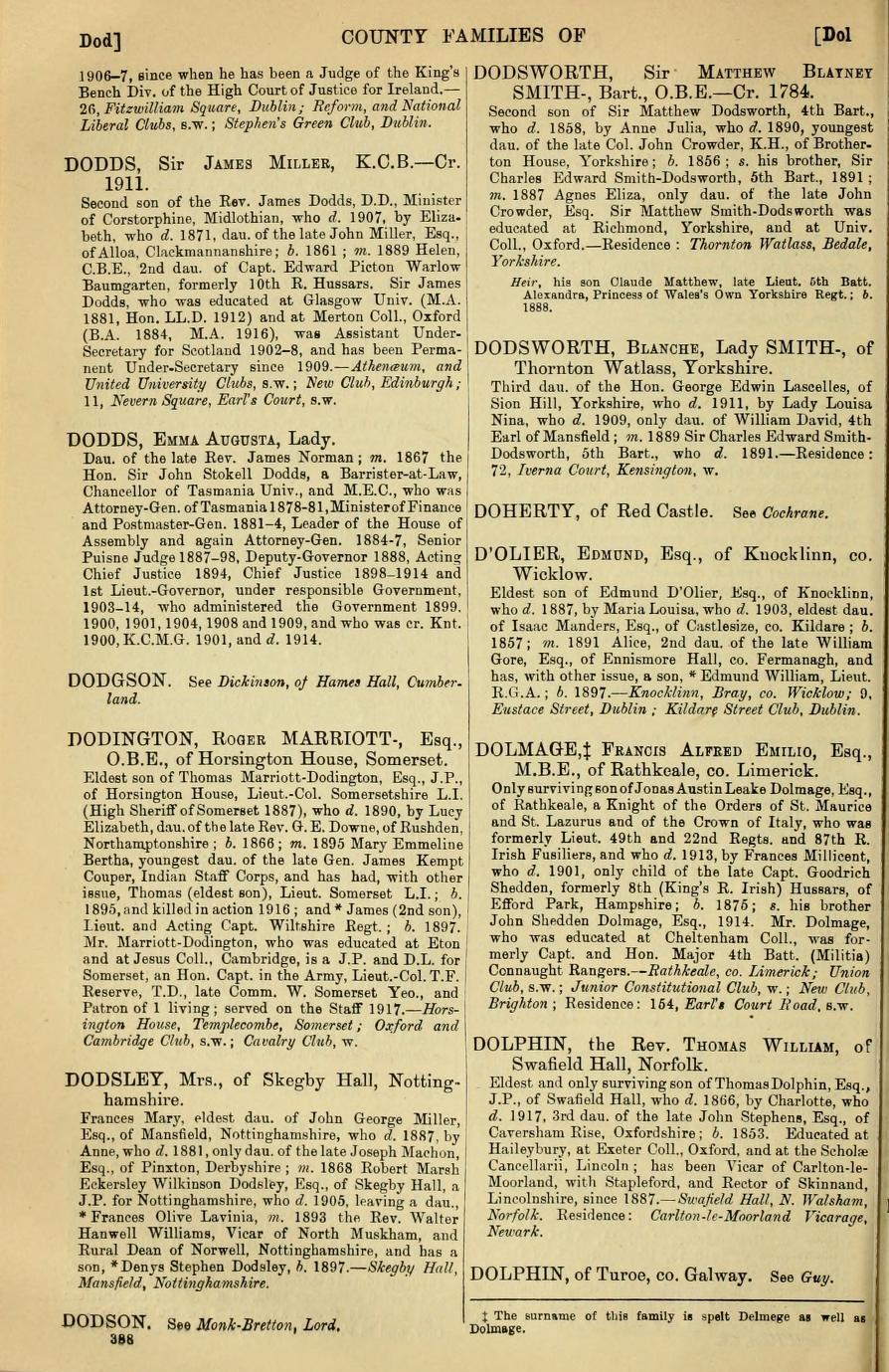 or, as per the original link, 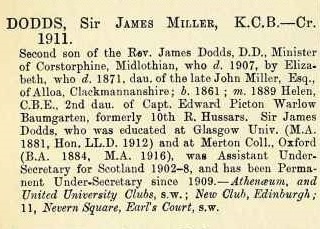 He was evidently also a scholar of some distinction:

[Stow was born in London in 1525, and died there in 1605. By trade he was a tailor, but all his tastes were for antiquarian studies. In 1561 he published a Summary of English Chronicles, which in many editions was very popular. In 1580 appeared the first issue of his Annals of England, a much larger work, since known as his Chronicle. It relates the history of England from the year 1108 B.C., when "Brute builded the city of New Troy, now called London." His Survey of London was first published in 1598, and again in 1603. He assisted in the compilation of the revised edition of Holinshed's Chronicle, edited Chaucer, and induced Archbishop Parker to print various early annalists. So poverty stricken was his old age that James I. granted him a licence "to collect among our loving subjects their voluntary contribution and kind gratuities."]

A SENTENCE of Ben Jonson, recorded by Drummond, gives the essence of all that a critic can desire to say about the "Venerable" Stow: "John Stow had monstrous observations in his Chronicle, and was of his craft a tailor. He and I walking alone, he asked two cripples what they would take to have him of their order." Here we have noted the industry which made William Harrison, a contemporary worker in the same field, call Stow's study "the only storehouse of antiquities in my time," and the cheerful humour which could turn his own poverty into a mock. The qualities that impress the reader of the Chronicle and the Survey of London are precisely those of laboriousness and geniality. Stow seems to have been inspired by the preternatural efforts of Leland. He regarded his own task in the light of a mission. "I, seeing the confuse order of our late English Chronicles and the ignorant handling of ancient affairs, leaving mine own peculiar gains, consecrated myself to the search of our famous antiquities."

Stow's language is easy and fluent, but not, as a rule, remarkable for elevation; he does not affect the parallelism or the symbolical allusions characteristic of so many Elizabethans. He laboured, he says, for the truth; and as he allows, in the dedication of his Chronicle, that his style is "simple and naked," criticism can well afford to be generous towards him. It is probable that he wrote just as he spoke, and it is certain that if he spoke as he wrote, Ben Jonson could not have found a better gossip for a day's walk. He is never afraid of a digression. He can discuss an antiquarian point at infinite length. But he does not by any means wear his heart upon his sleeve. One would have thought it difficult for a man who was of age in 1546, who lived to witness the accession of James I., and whose Chronicle (1318 quarto pages of black letter in the edition of 1601) devotes nearly half of its bulk to the reigns of Henry VIII. and his three children, not to indicate his prepossession on the subject of religion. Every turn of the weathercock is recorded; it is noted, for instance, as a matter of importance in the early reign of Edward VI., that Latimer, after a silence of eight years, resumed his sermons at Paul's Cross. But there is no attempt at criticism, and, indeed, in the whole of the Chronicle it would be hard to find a more definite declaration than when, describing under the year 1400, with characteristic gusto, the painted tomb and effigy of the poet John Gower, in Southwark, Stow concludes with the significant words: "All which is now washed out and the image defaced by cutting off the nose and striking off the hands, because they were elevated towards heaven." Like most of the Elizabethan chroniclers, who took their cue from the old monkish annalists, Stow thought a historian's duty (and there was doubtless prudence in the thought) to be merely to "point a moral and adorn a tale." At moralising, indeed, he is admirable. Here is a fine sentence about Wolsey: "Thus passed the Cardinal his time from day to day, and year to year, in such great wealth, joy, triumph, and glory; having always on his side the King's special favour, until fortune envied his prosperous estate, as is to the world well known, and shall be partly touched upon hereafter." And again of Wolsey: "Whose history who list to read with a clear eye may behold the mutability of vain honours, and brittle assurance in abundance; the uncertainty of dignities, the flattering of feigned friends, and the fickle favour of worldly princes." Such passages, however, are exceptional; and it may be added that in perusing the Chronicle it is not always easy to distinguish Stow's own composition from the work of his predecessors. The old chroniclers had little scruple in "conveying" a good narrative. It was an understood thing among them, for instance (and Stow is no exception), that Sir Thomas More's fragment on Richard III. should appear in their accounts of that unhappy monarch. Shakespeare had in this way the benefit of a sort of Homeric tradition on which to base his Histories.

The Survey of London is more read in our day than the Chronicle. It is an admirable guide-book to London under Elizabeth. After introductory discussions on rivers, bridges, customs, and other general topics, Stow gives a detailed account of each ward in the City, street by street, and sometimes almost house by house. His facts are usually interesting, and though much of the work is hardly literature, the writer's evident delight in his theme, and the occasional references to himself and his simple doings, make it enjoyable reading. As a basis for the history and topography of London it is said to be invaluable. A modern reader cannot entirely subdue a feeling of annoyance that, for all his keen eyes (they are described as "chrystaline") and his ready pen, Stow's only mention of the London theatres is a casual allusion in his first edition, which he cut out of the second! But the good man was doubtless better employed than in theatre-going. No dweller in the London of to-day can resist the charms of a writer who tells him there was a time when wells "in the suburbs, sweet, wholesome, and clean, among which Holy Well, Clerkes' Well, and Clement's Well are most famous, were frequented by scholars and youths of the city in summer evenings, when they walked forth to take the air";-nay, when the Venerable one himself, then a mere youth, fetched milk, at a halfpenny the quart, from a farm by the Minories, where "Trolop, and afterwards Goodman, were the farmers, and had thirty or forty kine to the pail," and Goodman's son let out the land for grazing, and "lived like a gentleman thereby."