In those days too, it was still regarded as important that families of good background (principally the landed gentry and the aristocracy) should participate as fully as possible in 'The Season'. An oik like myself can't possibly give a coherent account of all that this entailed – and to a certain extent still does – so please consult Wikipedia for all the various grand social occasions and fashionable sporting events that this comprised.

But for the maritally eligible daughters of such families, it was regarded as an unmissable opportunity to bag a husband. Until 1958 they were actually presented (not permanently, of course) to the Monarch, and known as 'debutantes' to signify their status accordingly – they had made their debut in Society. Their hapless prey were referred to as "debs' delights", and there was an unofficial consensus, or stud-book, as to the latters' social and financial merits. Think Jane Austen. The situation was exacerbated by the convention that elder sisters should marry first, and so on down the line, so if an elder sister fluffed her opportunities, her younger sisters were not supposed to leapfrog.

Of course, socially ambitious mothers would also organise informal events in order to bring attention to their debutante daughters, and it was possibly on one of these occasions that Gillian Findlay and Robin Brockbank first made eye-contact across a crowded room...

With all due respect to Miss Grenfell, my vote definitely goes to Gillian Findlay, altogether a neater sweeter maiden. 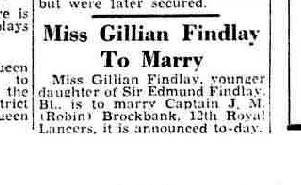 Though it was not until 24 Apr 1953 that her engagement to Capt Robin Brockbank was announced on the front page of the Aberdeen Evening Express. They were married in Ipoh on 12 Sep that year.

Gillian's elder sister Juliet had married Meyrick Ovens some two years earlier, at St Giles' Cathedral in Edinburgh, but as yet (Aug 2020) I've been unable to find any details. And nor can I locate any image of her as an adult, whether in the Tatler or anywhere else.