The Founder of Educate Together, Micheal Johnston and Sportsman Jonah Barrington are among Honorary Degree Recipients at Trinity 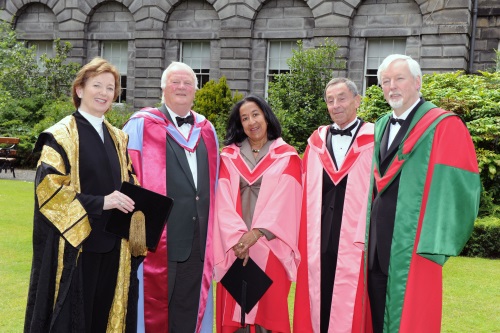 Educational leader, Micheal Johnston, and founder of the Dalkey School Project and Educate Together was conferred with a Doctor in Education (D.Ed). The Dalkey School Project was established in 1974 as the first publicly-funded, independent, and multi-denominational primary school in the country. Johnston was the first Chairman of its Board of Management and has been a driving force for the establishment and expansion of the independent schools ever since. In 1984, he set up Educate Together as the umbrella organisation of the sector. Today there are 56 Educate Together schools in the publicly-funded primary school system, and their importance in today's society is significant.

Squash player, Jonah Barrington, who won the British Open six times, was conferred with a Doctor in Laws (LL.D). He discovered his talent for the sport during his time as a student in Trinity, where he was a keen member of the College's squash team. As athlete, coach and sports advocate he has revolutionised the playing of squash internationally and is responsible for the high-powered training underlying the game today. He is largely responsible for transforming squash from a minority game to a professional sport.

As deputy Chairperson and CEO of Olayan Financing Company, Lubna Olayan is one of the most influential business women in the Middle East and was conferred with a Doctor in Laws (LL.D). She is an inspiring role model for Muslim women who seek to develop their careers while retaining their Muslim identities. A strong supporter of women's education and of greater understanding of Islamic cultures and religion in the Western world, Olayan is also a member of the International Business Council of the World Economic Forum, the Board of Trustees of the Arab Thought Foundation and of KAUST, the newly established Saudi-Arabian Science and Technology University, with which Trinity is developing links.

This is the last honorary degree ceremony at which the Provost, Dr John Hegarty will preside as his period of office comes to an end on July 31st next.