Like his 18/19th century ancestor and namesake, the 20/21st century Jonah was (and probably still is) unconventional and unpredictable, alternating exuberance and elation with bouts of self-doubt and prickliness. In many ways his rise to sporting glory now reminds me very much of Andy Murray (and if Murray should ever be honoured with a knighthood, then, by golly, Jonah should too).

Born in Morwenstow, he had attended Cheltenham College, a boys' public school, and though I don't suppose he was exceptionally academic, he did pretty well, and certainly excelled at sport.

And like Sir Jonah, he had studied law at TCD but left without a degree. He was officially described as having been "infrequently sober" during his first two years, and at the beginning of his third year he was sent down for a prank that misfired. As Jonah recounted at our first encounter after I moved into the top-floor flat in early1965, it had long been the custom for students to flour-bomb the procession of academic and civic dignitaries on their way to a service marking the beginning of each new academic year. Jonah, however, didn't realise that this practice had been banned by the University authorities during the summer vacation, and that transgressors would be expelled for bringing the College into disrepute.

So, more or less, he'd decided to become a world-class squash player, as you do. He already played a useful game, and I think his elder brother Nick had represented Cornwall in the County Championships for several years, but a Sunday morning league player might just as well have dreamed of playing for Barcelona. 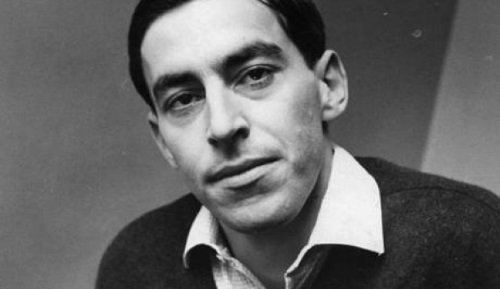 But Jonah didn't always have things his own way, especially when up against Cameron Nancarrow, a left-hander. Jonah, himself a left-hander, found him a very difficult opponent to beat, and Nancarrow was often described as Jonah's Jonah (that Old Testament prophet of doom). 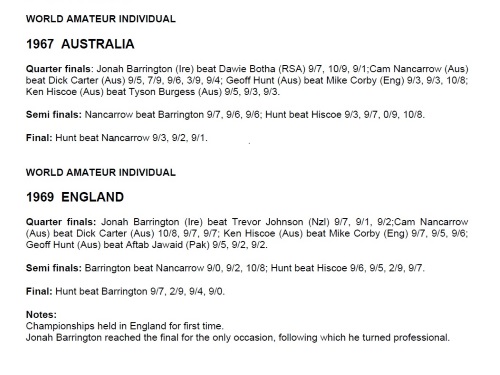 It was at the start of the 1967 Championship that we sent Jonah the notorious good-luck telegram ROOTING FOR YOU, SONIA AND ROBIN.

Little did we know that "Rooting" was the Australian euphemism for the game of "Hide the Sausage". My, how the Aussies chuckled. But clearly our rooting had been insufficient that year.

In the 1969 Championship, Jonah beat Nancarrow convincingly at the same semi-final stage, but lost to Geoff Hunt in the final. Our rooting had obviously improved but still left something to be desired, as it were.

Despite these occasional setbacks, how on earth had Jonah got so far so fast? His obsession with physical and mental fitness, constantly pushing and extending his limits of speed and endurance, was certainly a major factor in his astonishing rise to the top, and is often given sole credit, in that he could relentlessly wear his opponents down.

But allied to this, I think, was a focus on technical improvements in the quality of his strokes and tactical thinking. And thirdly, because he wasn't a particularly big chap, he had to become more physically aggressive, to withstand the inevitable and not always unintentional bodily impacts from his opponents.

The first was Naz, Nasrullah Khan, the squash professional at the Lansdowne Club, one of the Khan dynasty who have long dominated the squash world. He took Jonah under his wing and started turning the ugly duckling into a swan.

The second was Azam Khan, also a professional, who at was, at least at that time, a pretty rotund figure – possibly he was recovering from injury. But he could completely dominate a game by the subtlety and positioning of his shots. Jonah said that every game with Azam was a master class.

And the third was Abou Taleb, an Egyptian, a dominant competitor at that time. In previous games his powerfully aggressive manoeuvres on court intimidated Jonah. But as his own strength and confidence grew, Jonah was at last able to turn the tables.

We last saw Jonah when we visited him in Morwenstow at the end of our honeymoon in Dec 1967, but will always retain the most affectionate memories of him.

Unsurprisingly, he features on a great many internet webpages – click here for a particularly good review of his career in every aspect of the game. And I was delighted to see that Trinity College Dublin, which terminated his legal studies so abruptly more than 50 years earlier, has now awarded him a Doctorate of Law – click here to see the report.