In respectful and affectionate memory of Mark Rybak (8 Mar 1945 – 6 Mar 2018), son of Schmuel and Ruth Rybak, and founder of the Estonian Jewish Archives (EJA).

In his very comprehensive family narrative The Kaulbacks (published privately, 1979), Bill did in fact provide as much historical detail as was available to him at that time, when the Baltic states were still under the repressive paw of the Russian bear, together with the rather reconstituted recollections of Fenja herself. But Bill did like to apply a knightly, chivalric gloss to his forebears, direct or collateral, in tune with the Chestertonian romanticism of the late Victorians and Edwardians.

I should myself admit to wishful thoughts that the world was a nobler, cleanlier place, and that the sun was warmer, colours were brighter and people were kinder to one another. Perhaps, however, it would be anodyne and ultimately uninteresting. Reality may be messier but it keeps us on the edge of our seats. 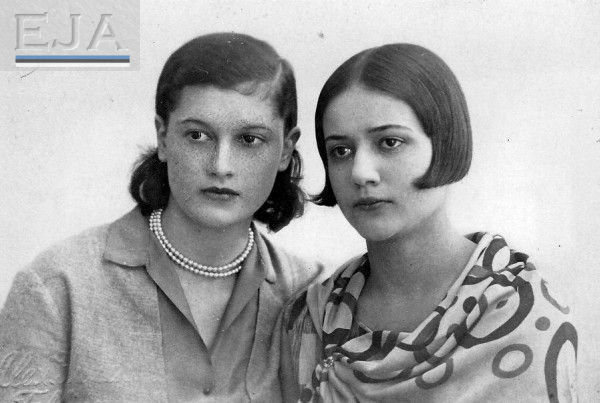 This photograph of Fenja Beltšikov and Aleksandra Vasiljev was taken in 1929, and is reproduced from the website of the Estonian Jewish Museum, (Eesti Juudi Muuseum, Еврейский музей Эстонии) by kind permission of Mark Rybak.

I was recently (Dec 2016) contacted by Mark himself, founder of the Jewish Museum in Tallinn, about Fenja's Estonian background, and many extremely interesting aspects of this have been illuminated.

Or rather, reconstructed from the ground up. This does no disservice to Fenja herself, as she and her family were caught up in the two most cataclysmic events in human history so far, the First and Second World Wars, as follow-up to the long and generally painful experience of the Jewish diaspora.

We're all only too aware of the Holocaust inflicted upon the Ashkenazic (Eastern European) Jews by the Nazis, but the pogroms of regular occurrence in the Tsarist empire stretched much further back in history. The reasons (not excuses) for all this are manifold.

Deicide is a particularly ridiculous accusation to level, as where would conventional Christianity be without the Crucifixion? And mediaeval monarchs who borrowed large sums of money from Jewish financial resources often found it simpler to massacre or expel the Jews rather than repay their borrowings. England was by no means guiltless in this respect, especially in the Middle Ages.

As Winston Churchill once perceptively remarked, the Jews are the elder brothers of humanity. But it has been a very difficult family relationship, and obviously I'm going to take that as understood in what follows – though please click here to see an historical account of the Estonian Jewish community in particular. And here for an account of how imperial Britain tried, and failed, to square the circle between Jews and Moslems in the Middle East,

But time has passed, the calendar has flickered faster than the eye could follow, and now it's Mar 2020, and a more realistic story of Fenja must be assembled before too late. She was a great admirer of my mother, whom she met only once at my wedding with Sonia, but immediately recognised Katie as a fellow fabulator (and enquired about her ever after), and was fascinated by the nasally encarmined J Wilfrid Fox, gentleman escort of Joanna Malcolm-Baker, Katie's best friend at that time. Birds of a feather...

Barely a dozen emails passed between Mark Rybak and myself, in less than a week, just before Christmas 2016, and he died just 15 months later (in fact, the illness kicked-in almost immediately the correspondence started). Mark Rybak's emails #6, #8 and #10 are all-important. His email #10 is an annotated reply (in red) to the queries raised in my email #9.

And of course there were embedded images in his emails, as you will see. He obviously spoke at least four languages (Estonian, Russian, Hebrew, and English, plus Yiddish and German in all probability) and made excellent sense in all of them (unlike all too many multilingual individuals). This legacy deserves to be thoroughly integrated by a competent historian to make true sense of, but we may be sure in advance that it will be very different from Bill's account in The Kaulbacks.

Mark's first, tentative, target was the inaccuracy of Bill's narrative, as footnoted below in a digitised version

BELTCHIKOFF OF ST. PETERSBURG AND TARTU

The Beltchikoff family, landowners, came originally from south Russia,1 but were already living near St. Petersburg before the Bolshevik revolution of 1918.2 Early in that upheaval Julius Falk Beltchikoff, Sonia Ossipovna3 his wife and their five children, abandoning everything, fled to Esthonia on the Baltic where the White Armies were already driving out the Reds and the country was about to embark on its brief twenty years of freedom.4

Julius Falk established a prosperous cotton-spinning business in the old university town of Tartu (Dorpat) in conjunction with British cotton interests and prospered. The children were educated with German governesses, and at the local schools and university, and travelled widely in Europe with their parents; but disaster struck in 1939. In September of that year, in compliance with their mutual assistance pact with Nazi Germany, the armies of Socialist Russia overran eastern Poland and without warning or declaration of war, invaded and seized the free Baltic States.

Esthonia was not spared and all "White Russians" were deported as "capitalist enemies of the Socialist Peoples" to Siberia, or other of the far eastern provinces. The Beltchikoffs amongst them were exiled to a forced labour camp in Tashkent where Julius Falk and his eldest son Oskar Julianovich both died of their privations.5 Sonia Ossipovna and her other three sons somehow survived and were at length, after the end of the war in 1947, repatriated to the new Esthonian Socialist Republic, where Sonia Ossipovna died in 1961.

Only their daughter Fenja Julianovna escaped this experience. She had been married in 1938 to Bernard Arbit in Bessarabia, which was then part of Roumania, and when the Russian Socialist armies invaded in 1940 she escaped to British Palestine6 and thence to Lebanon where eventually in 1949 she married Lieut. Colonel Roy (Bill) Kaulback, at the British Embassy, Beirut.

The family records were all lost either in the Bolshevik revolution of 1918 or in the deportation of 1939 and it has not proved possible to recover earlier or more precise details of the family. [Hmm].

Please note that the EJA website eja.pri.ee referenced in Footnote 5 above is currently blocked. Hopefully this issue will soon be amicably resolved.

However, the EJM website muuseum.jewish.ee is very much open for business, and maybe it replaces the EJA site as well. To access the picture galleries from the Home page, click on EJA site, then Jewish Community, then (say) 'Photoalbum - community before 1960', and then use the excellent search facility.

Unfortunately, despite trying all the obvious possibilities, I've not been able to find the new location of those two images referenced above, and I'd welcome any successful suggestions.

I'm not sure if I yet have the expertise to summarise the intricacies of Mark's other researches into Fenja's background. For sure, as Andrea used to say, I'll see how they all pan out on the internet first.

But I'd like to emphasise that Fenja was not the Baltic adventuress that I used to think her, certainly not the home-breaking harlot that others thought her – Bill had for whatever reason deserted his first wife (in 1941) long before he met Fenja. She was afloat on a sea of postwar uncertainty when she met Bill and she scrambled aboard enthusiastically – indeed, ever after, she wouldn't allow him to be alone in a room with another female whether 19 or 90 for fear that he would be enticed away!