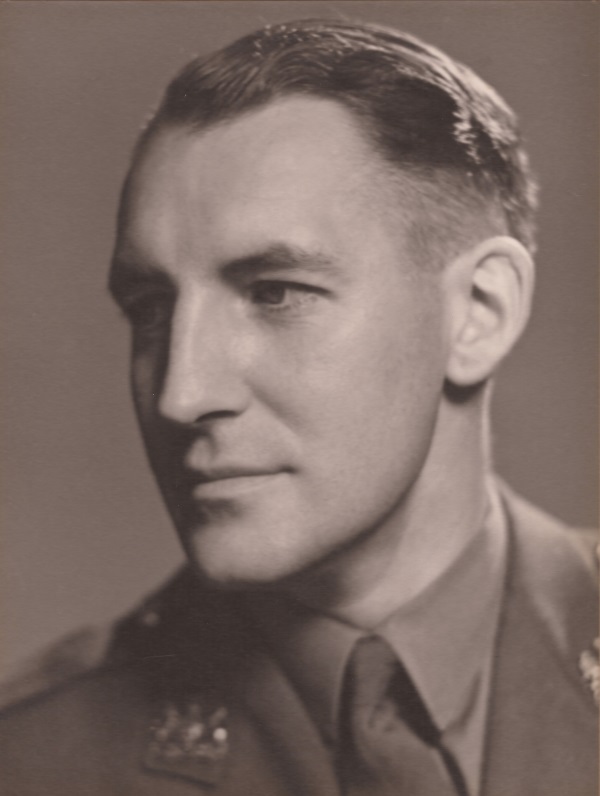 The British explorer, geographer and herpetologist Ronald John Henry Kaulback was born on 23 July 1909 at the Royal Military College in Ontario, Canada, where his father was staff adjutant. He died in Hoarwithy, Herefordshire on 2 October 1995. The family had German origins. In 1922 Ronald's father Henry Kaulback changed his name from 'Kaulbach' to 'Kaulback'.

Kaulback grew up in Richmond in Yorkshire, England, and was educated at Rugby and Pembroke College, Cambridge, where he read History, German and Russian. Initially he wanted to become a diplomat, but was urged by two friends of the family, General Sir Percy Sykes (1867-1945) and General Sir Percy Cox (1864-1937), both Fellows of the Royal Geographic Society, to join the botanist Frank Kingdon-Ward on his next expedition to Tibet.

When Kingdon-Ward asked for his credentials, Kaulback suggested his senior tutor at Pembroke, who wrote: 'I have known Kaulback well through three tumultuous years at this College, and can confidently recommend him to you as an explorer-companion, or as a buccaneer, or probably best of all as president of a South American republic.

Kingdon-Ward, Kaulback and the photographer and cinematographer B.R. Brooks-Carrington (1888-1976), set out in March 1933 and reached Tibet via the Lohit Valley in April. Brooks-Carrington had been added to the expedition at a late stage; his task was to document the expedition with photographs and films in colour. After only three months Kaulback and Brooks-Carrington had to turn at the border of the provinces Zayul and Nagong because their papers were not in order. Kaulback returned with the ailing Brooks-Carrington along another route to Burma, passing over the Diphuk La, a pass between the valley of the Di Chu, a minor tributary of the upper Lohit in Assam and the valley of the Seingkhu, a tributary of the Nam Tamai, which is itself a tributary of the Nmai Hka. He finally reached Fort Hertz (near the village of Putao) in Burma on 24 September.

Kaulback was fascinated by Tibet and in 1935 he organized his own expedition, which lasted from April 1935 to the end of 1936. He was accompanied by John Hanbury-Tracy. Their aim was to find the sources of the Salween and to map its drainage area. They failed to reach the sources due to the tense political situation - Hanbury-Tracy had grown a large beard while on expedition and was suspected of being a Russian spy at some point - but they managed to map a large tract in southeastern Tibet and did some natural history collecting besides.

In 1938-1939 Kaulback spent 18 months hunting for reptiles and amphibians on behalf of the British Museum (Natural History) in the Triangle, the area in Burma between the Nmai Hka and the Mali Hka, two rivers which join to form the Irrawaddy. Though he complained that the area was not as rich in reptiles and amphibians as he had expected, the results were interesting. His specimens contained one new species of snake, Kaulback's lance-headed pit viper (Protobothrops kaulbacki, synonym Trimeresurus kaulbacki) and several other novelties, such as a frog, Rana kaulbacki. Kaulback's correspondent at the Natural History Museum was the herpetologist Hampton Wildman Parker (1897-1968), at the time Assistant Keeper of the Department of Zoology. His collections were described by another herpetologist, the physician Malcolm Arthur Smith (1875-1958). From the correspondence it becomes clear that Kaulback had become quite knowledgeable about reptiles and amphibians.

At the outbreak of WW II Kaulback returned to England where he was commissioned to the Intelligence Corps as an instructor at Netheravon, Wiltshire and in Canada. He asked to be given a chance to see action, and was sent to South-East Asia as a lieutenant-colonel. There, as Officer Commanding Tactical Wing, Kaulback led an intelligence group working in the Lashio area in Burma, behind the Japanese lines. When in 1944 the 14th Army started an offensive, Kaulback's force turned to guerilla warfare and sabotage. By 1945 he had 13,000 Karen tribesmen and 20 British officers under his command; they liquidated 13,500 Japanese soldiers with very little loss on their own side. For his contribution Kaulback was appointed to the Order of the British Empire in1946

When the war was over Kaulback moved to Ardnagashel House on Bantry Bay in County Cork, Ireland, and turned it into a hotel. The botanist Ellen Hutchins (1785-1815) had lived for a few years on the estate where her brothers had planted many exotics; Kaulback added trees and shrubs from the Himalaya. The house was destroyed by fire in 1968, but partially rebuilt in 1969 and housed a restaurant until Kaulback retired in 1974, the year he had a heart attack. Later Kaulback moved to Hoarwithy in Herefordshire, where he lived until his death.

Kaulback was married twice: in 1940 to Audrey [Howard] (1916-1994); they had two daughters and twin sons. They separated in 1976, but the marriage was not officially dissolved until 1984, the year Kaulback married Mrs. Joyce Woolley.

Note. The years of birth and death of Brooks-Carrington vary according to the source. I have not been able to discover anything about the pictures and films shot by Brooks-Carrington while on expedition with Kaulback and Kingdon-Ward.

Click here for his very meagre and underwhelming Wikipedia entry (which I look forward to improving in the near future).

Click the titles for his very detailed and entertaining obituaries in the Daily Telegraph and The Times.

Click here for his biographical details (including his two books Tibetan Trek and Salween) as summarised from his brother Bill's family history The Kaulbacks.

And for a fascinating retrospective dialogue between Ron and Bill also reproduced from The Kaulbacks, click here.

Click Coffeebean the Goat or Losing a Leg, amusing or thought-provoking in turn.

Click here for an unpleasant supernatural encounter of his.

And here for a photographic timeline – not many pictures just yet, but many others will surely emerge in due course. 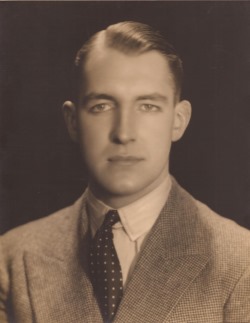 Ronald Kaulback's tangible legacies from his first two expeditions (to Tibet) were his vastly entertaining narratives, Tibetan Trek and Salween, plus the many photographs that he took and the detailed maps that he drew. The books were widely appreciated, of course, but the photographs and maps initially achieved less prominence, as the irruption of the Second World War sent him in new directions. Fortunately, they were eventually rescued from oblivion and presented to the Tibetan Society and the Royal Geographical Society respectively after his death.

The collection of lizards and snakes that he made on his third expedition, to Upper Burma, on which he travelled alone, immediately prior to the outbreak of the war, ironically fared rather better. Ron was fortunate to have an opposite number at the Natural History Museum in South Kensington, a Mr Parker, with whom he could correspond (at rather long intervals) and to whom he could dispatch his specimens in the full confidence that they would be made welcome and be fully documented. Please click here for a brief glimpse of their exchanges during the period 1938/39, a window into the trials and triumphs of a specimen-collector in dense jungle surroundings (though note the invariably impeccable typing on his faithful Underwood portable).

The last of these letters on 25 Jul 1939 shows that he was aware of the imminent likelihood of war, and we know that by year's end he was back in England and already commissioned as 2nd Lieutenant, Intelligence Corps. So there would very probably have been quite a backlog of specimens that had little chance of reaching England safely, and were most probably sent to the Indian Museum in Calcutta instead ...

... which explains the existence of a substantial catalogue of his specimens that was published by that institution not long afterwards:

This publication is still cited today as an important contribution to the ongoing study of Upper Burmese herpetology – as even a casual google will confirm.

And trimeresurus kaulbacki, for example, has its own entry in Wikipedia! 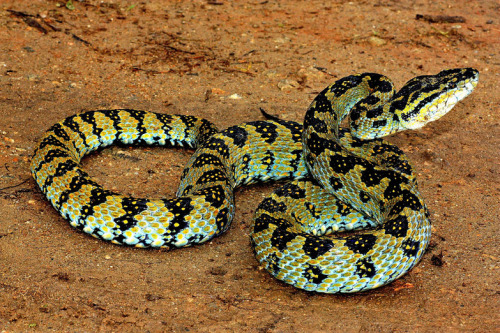 He evidently had a special affinity with snakes, having kept a couple of black pit-vipers as pets (they used to cluster inside his shirt, for warmth) back in 1933, and at Ardnagashel in the early 1950's he kept a companionable boa-constrictor by the name of Marmaduke.

When my wife and her sister first moved to London in 1958 to undertake their secretarial training, Ron arranged with the Natural History Museum, hardly a stone's throw from where they were staying, to provide them a private viewing of his collection, in the nethermost region of the building. And in 1996, just a few months after his death, my wife arranged a similar visit for the benefit of myself and our children. Please click here to see some photographs taken on that occasion ... and could that be a specimen of Trimeresurus kaulbacki that she's holding up in picture #4?

We now know (July 2015) that in fact it couldn't and wasn't, thanks to a very interesting and informative contact from an expert in these matters:

I was recently (in June this year) part of an expedition to Arunachal Pradesh in north-east India, which borders both Tibet and Burma, where Protobothrops kaulbacki was found in 2009. Since 2011, Gerry Martin, an Indian herpetologist, has been revisiting the area trying to find a live specimen for venom research. I am happy to report that we did find one this year. Since my return, I have been trying to find out more about Ronald Kaulback, and was eventually directed to your website.

You may be interested to know the answer to your question ("and could that be a specimen of Trimeresurus kaulbacki that she's holding up in picture #4?"). Actually it is not. It definitely has legs and appears to be a juvenile monitor lizard. I have seen the type specimen of Protobothrops kaulbacki at the Natural History Museum in London, and I think it is probably the one in the jar on the left of the upper shelf in picture #1, also seen in picture # 3 (the left of the three complete jars in the picture).

I'd be happy to send you a picture of a live specimen for your website if you are interested (actually, it would be from one of my colleagues on the expedition as I ended up losing the card which had all my photographs on it).

I have an article coming out about the encounter some time this week in The Conversation, entitled "Scientists at work: Tackling India's snakebite problem".