A shiver runs down the spine at this image of our far-flung battle-line, those steel fortresses of the greatest (and, on the whole, most benevolent) empire in the history of the world. How soon did indeed our navies melt away, and on dune and headland did sink the fire. Perhaps we did forget...

A lot of people have got very agitated recently as to why King George V didn’t offer his cousin Tsar Nicolas II (and Nicholas’ close family) asylum in Britain after Lenin had hijacked the Russian revolution. This isn’t the place to discuss that, but amends were subsequently made by rescuing Nicholas’ mother, the Dowager Empress, and a bevy of aristocratic appendages, as now briefly recounted. 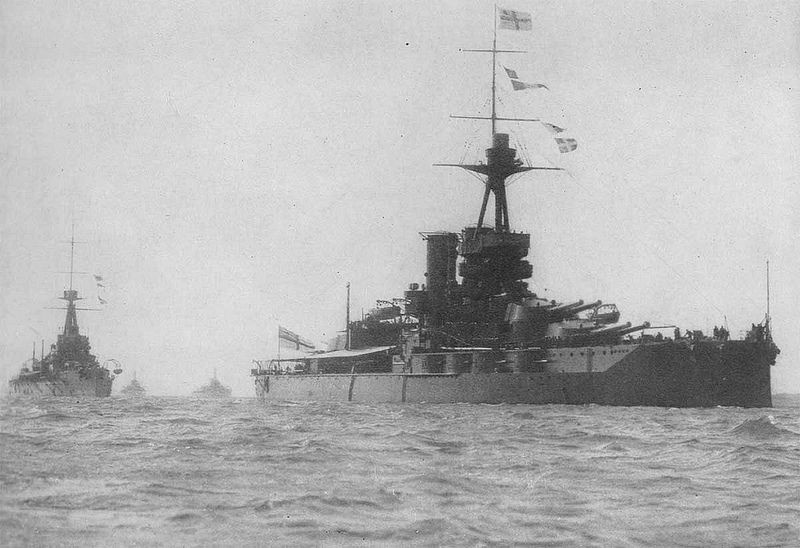 [The battleship HMS Marlborough, under the command of Captain, later Admiral, Charles Duncan Johnson (26 Mar 1869 – 26 Jun 1930)] served in the Black Sea during the Allied intervention in the Russian Civil War to support the Whites against the Red Bolsheviks. On 5 April 1919, Marlborough arrived in Sevastopol, before proceeding to Yalta the following day. 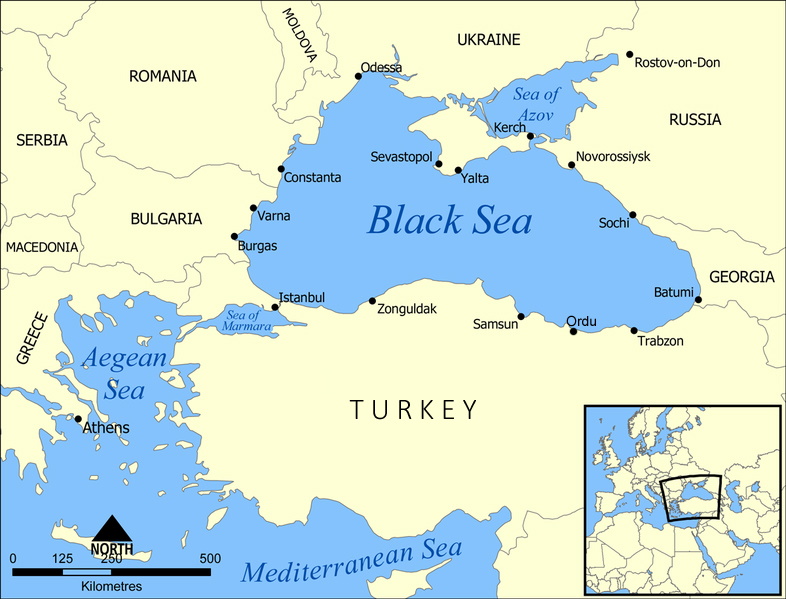 Marlborough took Dowager Empress Maria Feodorovna and other members of the former, deposed [ie murdered] Russian Imperial family including Grand Duke Nicholas and Prince Felix Yusupov aboard in Yalta on the evening of the 7th. The Empress refused to leave unless the British also evacuated wounded and sick soldiers, along with any civilians that also wanted to escape the advancing Bolsheviks.

The Russian entourage aboard Marlborough numbered some 80 people, including 44 members of the Royal Family and nobility, with a number of governesses, nurses, maids and manservants, plus several hundred cases of luggage. About 35 officers' cabins were vacated and additional bunks were installed, with the Empress taking over the Captain's cabin.

On the morning of 12 April Marlborough anchored off Halki Island, about 12 miles from Constantinople, due to some uncertainty over the final destination for the former Russian Royal family.

Were all these extravagantly titled aristocrats worth saving, and from what? Would they too have been murdered, as had the Tsar and his close family, and as would untold numbers of Russians in the subsequent reigns of comrades Vladimir Ulyanov and Josef Jughashvili?

From a practical point of view, who did get saved, and who escaped anyway? Click here to see the ‘passenger list’ hastily compiled and typed by a senior Marlborough officer.

It’s not terribly legible, and would be hard work to transcribe accurately, but some conclusions can be drawn.

1) It seems that the Grand Duchess Olga Alexandrovna, the Tsar’s younger sister (who had commissioned Friedrich Kaulbach’s visit to Skierniewice) doesn’t feature – she and her (second) husband had made their own way to western Europe, and would finally settle in Canada. Perhaps the sketches went with her? 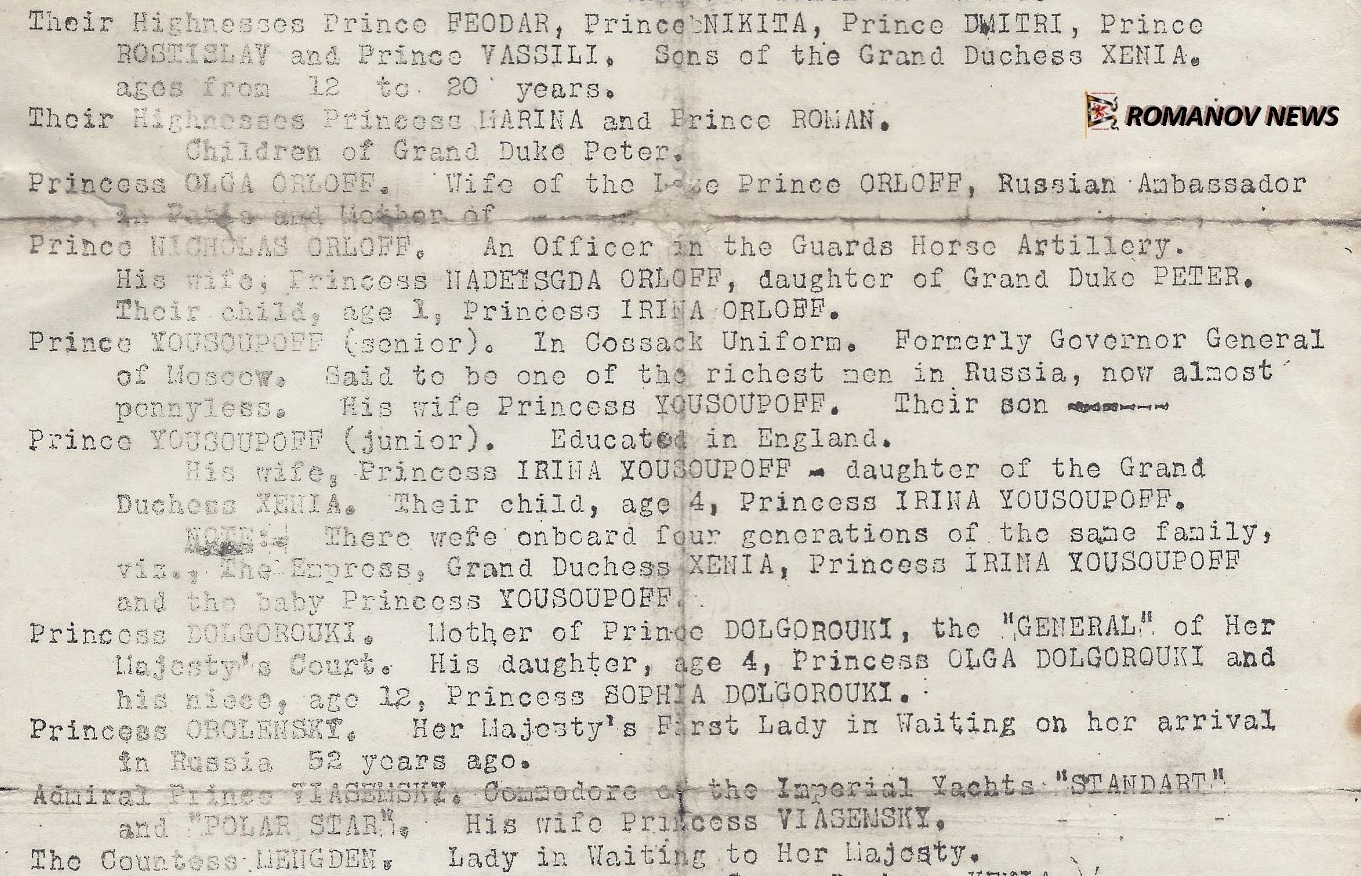 as do her retinue 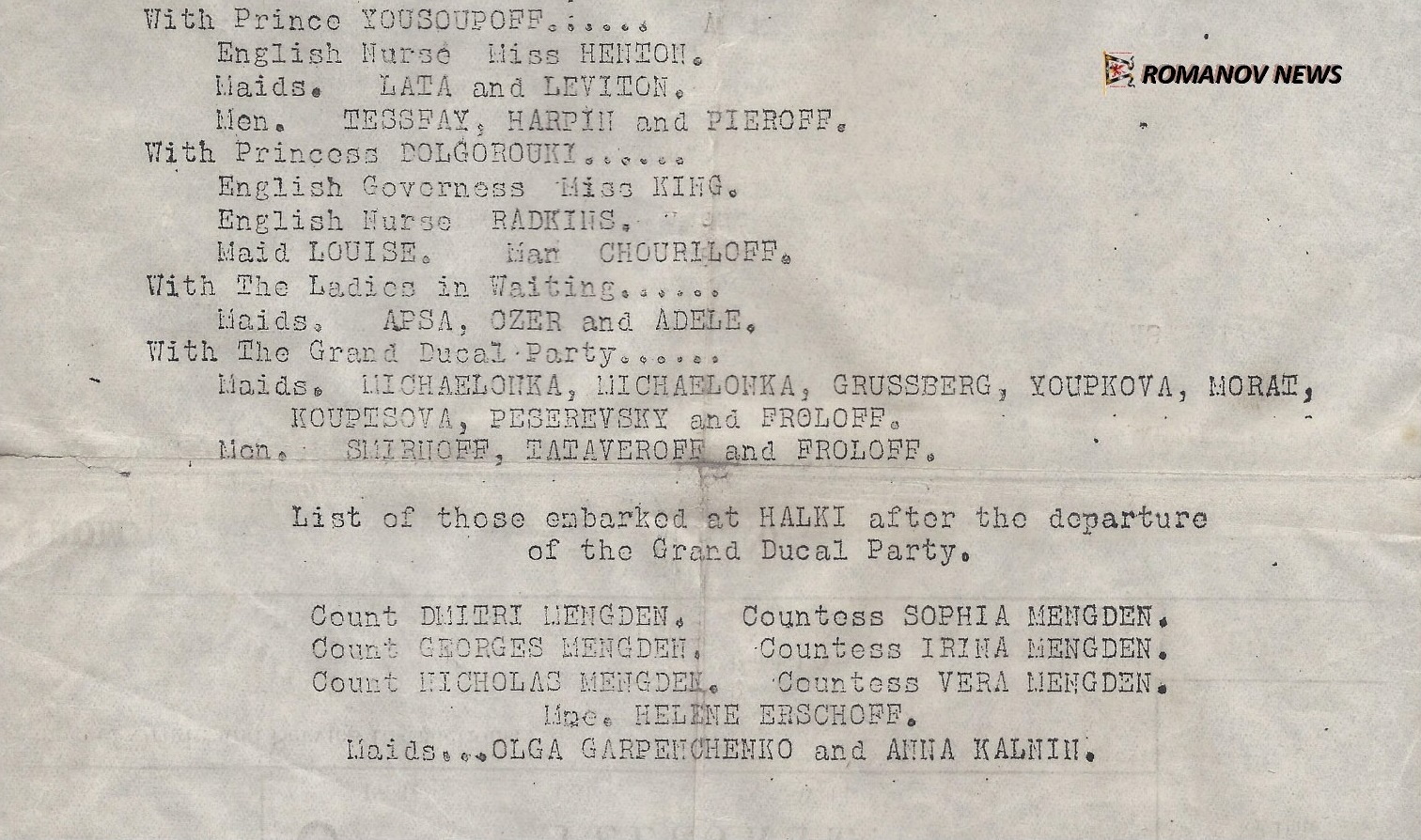 Following a life-style of relentless promiscuity, and conversion to Communism, she eventually settled in England, as recounted elsewhere.

3) Disappointingly, there is no explicit record of one Vladimir Wolfson, a teenager of 16 from Odessa, who was evacuated in 1919 by a British warship and made such a good impression upon the captain, that he was taken back to England, educated at the captain’s personal expense, and took British nationality (the captain in question was inescapably Johnson or Willan, as no other British naval rescue missions were sent to the Crimea). His subsequent career reads like a James Bond novel, but sadly he was killed in the BOAC Comet disaster in 1954, as will be recounted elsewhere.