The Balquhatstone Connection
of the Second Line 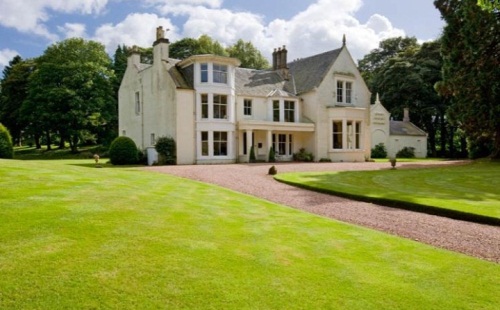 In view of the huge fascination that Balquhatstone and its genealogical history evidently (and understandably) exert on expatriate Waddells in England and the USA, for whom the ancestral Scottish pride in the Clan system (actually operative only in the Highlands) and its territorial affiliations evidently still burns bright (to judge from activity on the Web), I'll try to put together as much as I can about what has happened since Balquhatstone was first sold by the improvident James Waddell (9th of the First Line) on 15 Jul 1818.

It must have been rather embarrassing, or even galling, for the older man to have to part with his property to someone so much younger, and evidently more prosperous, than himself. But in the aftermath of 1816, the notorious Year Without A Summer, his rental income from the tenant famers on the Balquhatstone estate might well have totally collapsed, leaving him with no option but to sell to somebody better-financed than himself.

Also, and perhaps more importantly, James had spent a great deal of money sinking exploratory mineshafts for coal and other minerals, such as iron ore, but without success. Ironically, the coal was indeed there, and in abundance, but it was his successor who was to discover it – enabling him to improve and extend the house beyond all recognition. Indeed, the Slamannan Railway was built in this very era, to give access for minerals from pits in the Slamannan area to markets in Glasgow (over connecting railways) and Edinburgh (over the Union Canal). 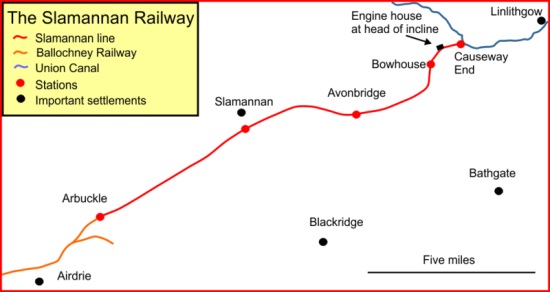 Furthermore, as Gavin Waddell op cit has pointed out, it is highly likely that James was adversely affected, whether as shareholder, depositor, or both, by the failure of the Falkirk Union Bank on 18 Oct 1816.

We now need to follow down the first of two collateral Waddell Connections ultimately uniting to produce George Waddell 2nd of Balmuzier & Ballochney, born in 1788, who was the purchaser of Balquhatstone from his third cousin (once removed) James Waddell 9th of Balquhatstone, born in 1767 and thitherto the Laird of that estate.

The Peddie and Peddie-Waddell Connections

And secondly we must identify a new bloodstock, coming up on the rail so to speak, destined to converge with the existing pedigree (or should that be peddiegree?). Cousin Gavin remarks that the Peddie family was well-known in Edinburgh intellectual and artistic circles, and one does get the impression that the Peddies had perhaps a rather more metropolitan and sophisticated tradition than the more rural Waddells with whom Alexander Peddie intermarried in Sep 1864, as we see below, bringing about the tragically brief Peddie-Waddell line.

However, I am assured by Anne Burgess that the Waddells were no less metropolitan and sophisticated than the Peddies, having aristocratic connections, and a long history of links to Edinburgh. Earlier lines were related to the Campbells of Melfort and, via the Livingstones of Westquarter, to the Earls of Callander. Several Waddells became Edinburgh lawyers, Writers to the Signet etc, and George Waddell's wife was well-connected in her own right. They had a residence in Edinburgh as well as the family seat at Balquhatstone. Not quite rural yokels!

(Another portrait, sitter unknown, also exists, and maybe relates to the same family.)

The lamentably early death of George Peddie-Waddell, killed in the Boer War, and commemorated by an ornate memorial clock-tower in the High Street of Slamannan, deprived his parents of their only son. The inscription reads as follows (click here for a close-up of the memorial tablet itself and here for its counterpart on the wall of the Waddell enclosure in the Slammanan kirkyard):

The Peddie name was continued briefly through their second daughter Margaret, whose son John Dick-Peddie is the last entry in that section of the Waddells et al family tree. But he died sine prole in 1994, and the name was (as far as I know) extinguished thereby.

An extract from the link

James and Maxine Harvey have also taken the difficult decision to sell their home, Balquhatstone House, seven miles from Falkirk, in Scotland. It is part of an estate that has been in the same family for nearly 500 years, but the Harveys, who are 80 and 71 respectively, cannot maintain it at its present size.

"We will be broken-hearted and we'll miss the house," says Maxine, whose three grown-up daughters say the time is not right for them to run the estate.

The seven-bedroom property, on sale for £1.5m, has two grand receptions, a dining room and a billiards room. Built in the 18th century, it is being marketed with 16 acres of woodland, a pond and grazing fields – the Harveys are keeping the bulk of the 300 acres, which were given to the family by King James IV of Scotland.

However, I now understand (Feb 2014) that Balquhatstone has been withdrawn from sale for the time being.

I found the tortuous meanders of Peddie et al family names, and whether their middle names were part of their surnames or not, almost impossibly difficult to follow, and their habit of using surnames as first names, even for girls, rather bizarre. Had they at least used hyphens, and used them consistently, the situation would have been easier – and Uncle Sandy, to economise on space, frequently omitted surnames from the intricate family trees that he drew up, whenever he considered them to be implicitly obvious.

My learned cousin Gavin remarks that it was sometimes even more complicated than that:

(I use Debrett's Correct Form, the 1978 edition, as my guide on the subject of hyphenated names.)

Waddells seemed especially prone to different ways of using hyphens or no hyphens.

From some of the land titles of Balquhatstone - when the heiress Elizabeth Gaston Ralston of Glenellrig married George Waddell of Balquhatstone (formerly of Ballochney) they for a time took the name Waddell-Ralston by Royal Licence in order to inherit the estates.

Later, when their daughter Georgeina-Catherine married Alexander Peddie, they took the name Ralston-Peddie-Waddell, subsequently only Peddie-Waddell, for the same reasons.

However, John was Dick Peddie without a hyphen, although by locals he was called Mr Peddie-Waddell (as he was on one of his death certificates). By also having double-barrelled Christian names they made life even more complicated.

The key to the legality of the form appears to rely on the 'by Royal Licence' [provision].

The question arises as to whether "virtual hyphens" should be introduced for the sake of clarity, and the underscore character would be ideal, but I think it would meet with determined opposition and I'm a pusillanimous invertebrate at heart.

In general there seems to be two distinct reasons for the adoption of a bipartite ('double-barrelled') surname:

The use of a hyphen isn't essential to a double-barrelled surname – indeed, of course, many bipartite names aren't hyphenated, though tripartite surnames generally seem to be.

The procedures often rightly considered to be necessary or at least advisable when conjoining ones surname (or indeed changing it altogether, or changing ones forenames) are not as complicated as one might suppose.

In my own extremely limited awareness of the business of changing ones surname in Britain (which might not apply to Scotland or N Ireland), it may involve a Royal Licence (eg Kaulbach to Kaulback, or Howard to Fitzalan-Howard or Howard-Sneyd) or at least an announcement in the (London) Gazette 1,   2 (eg Weidner to Coupland, plus additional forenames).

And more recently I'm aware (at least at third hand) of family members changing forenames by Deed Poll, or changing surname simply by notifying all and sundry (maybe an affidavit is necessary if a birth certificate, passport or driving licence is concerned).

There appears to be a clear distinction between legitimisation and evidencing - a personal decision to change ones forename, surname, or both, appears to be legitimate under English law, but to evidence or prove it may require a Deed Poll. The transfer of a coat of arms as well as a surname appears to require a Royal Licence.

Using our service, you can legally and officially change any part or all of your name. You can change your forenames, surname (or both), add names, remove names, change the spelling of your names or rearrange your existing names.

A surname may also be altered or changed by Royal Licence. Arms granted to one family can only be transferred to another person not in legitimate male line of descent from the original grantee by means of a Royal Licence, followed by an exemplification of the arms. A Royal Licence is usually granted, on the advice of the Secretary of State for Justice, where the petitioner is required by a clause in a will to assume the name and arms of the testator, in order to inherit a legacy, but voluntary applications are also entertained.

A petition for such a Royal Licence is drafted by an officer of arms for signature by the petitioner. It is then submitted on his or her behalf by the officer of arms to the Ministry of Justice, who forward it to Buckingham Palace. A resulting Royal Licence and any subsequent exemplification of arms must be recorded in the official registers of the College of Arms to be valid.

I'm not at all clear about what effect a changed surname might have on the surname of ones existing children, though subsequent children would of course automatically acquire the changed version. But I feel that it surely shouldn't affect the children in collateral branches of the family – my mother-in-law Audrey, directly descended from Bernard Edward Howard, was frequently referred to (incorrectly, I thought) as Audrey Fitzalan-Howard, as were her sisters, mutatis mutandis, even though it was Bernard's great-nephew Henry Howard who had added the prefix by Royal Licence.