Why did the pilots not use the engine? 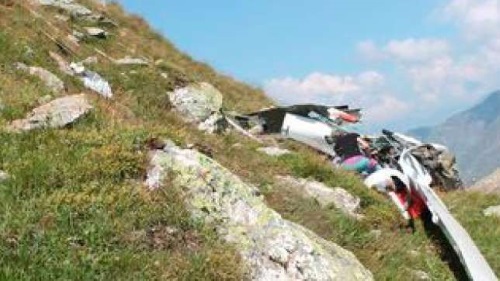 Mountain walkers heard the impact and alerted the rescue teams

Courmayeur (I). A Swiss and a New Zealander lost their lives yesterday when a glider crashed on the Italian side of Mont Blanc. The circumstances of their deaths are puzzling, because the weather was superb, the pilots experienced and the aircraft modern.

The weather was ideal for a flight round Mont Blanc. Yesterday morning the Schempp-Hirth CS-22 Arcus M glider, registration HB-2503, took off from the airfield in Bex VD. The aircraft was brand new, with state-of-the-art equipment.

Despite this, it ended in a fatal crash on the Italian side of Mont Blanc. The glider hit the mountainside shortly after 2.30 p.m., at an altitude of 2450 metres (as reported in Blick CH).

The Swiss Jean D* (65) and his Swiss resident New Zealand colleague Simon W* (66) were experienced pilots and members of the Bex VD Gliding Club. They knew the area like the back of their hands. Despite this, a drama ensued.

Mountain walkers heard the impact, and immediately alerted the mountain rescue team in the Italian town of Courmayeur. At about 2.55 the helicopter took off with the emergency doctor on board. Minutes later it landed at the site of the accident.

"The impact must have been very violent. There were only scraps of wreckage", says mountain rescue leader Oscar Taiola (59) to Blick CH. "The New Zealander was dead. The Swiss lived only for a few minutes, then he too died."

So far as is known, the accident unfolded like this: "The glider landed on its belly, was catapulted back into the air and then hurtled down the slope", continues the mountain rescuer. But why did the crash come about? Taiola: "That is what we are wondering too. For the weather was fantastic. There must have been at least another ten gliders flying in this area today."

Perhaps the glider lost height suddenly as the result of a sudden downdraught, and could not climb again, guessed Taiola. But he wondered, "The glider has an engine. Why did they not use it?"

The mountain rescuer thinks it unlikely that one of the pilots suffered a fainting fit. "For then the other would have had to take over the controls."

The Italian Air Safety Office, the Financial Police and the Criminal Police are investigating the possible causes of the accident.

There is a tense atmosphere on the home airfield at Bex VD. "Both pilots were active members in our flying club", says airfield boss Michele Cherubini to the Valais news site "24 Hours". "They were experienced pilots." Cherubini's thoughts are for the families of the victims. "Flying accidents are always dreadful. There is so much sorrow."

*Names known to the editorial staff 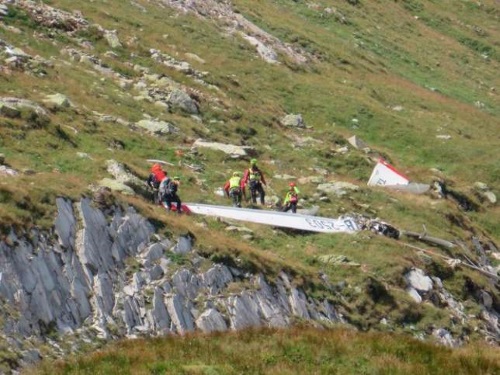 The rescue party at the scene of the crash

A Swiss and a New Zealander lost their lives today in the crash of a glider in the Aosta valley in northwest Italy near the Swiss and French borders. They had earlier taken off from the Bex VD airfield on a round trip.

According to the Italian news agency Ansa, they wanted to fly around Mont Blanc. The casualties were just the pilot and passenger (both aged 70) of the glider.

The glider crashed towards 3 pm on the Pré de Bar glacier. This is located at the upper end of the Val Ferret in the Courmayeur municipality.

The impact was very violent. The plane was completely destroyed in the crash. The two men died, according to Ansa, whilst still at the accident site. The bodies were flown to identify by helicopter to the valley. (SDA)

I am deeply grateful to Forfarian, who located and translated the main report, and has also provided an extremely helpful commentary:

Being a glider pilot myself, I can answer the mountain rescue man's question. When not in use, the engine folds up and stows itself inside the fuselage. It takes time to start a glider engine. First you have to wait until the engine emerges from its housing inside the fuselage and extends its propeller blades. That can take many seconds - half a minute or more. Only after that can the engine be started, and in some cases the engine can only be bump-started, by putting the glider into a dive with the engine fully extended. If they were caught by a sudden vicious downdraught close to the ground, there would not have been time to extend and start the engine.

I've searched for any reports on the accident investigation but so far found none in either German or French. It will, of course, be in Italian, and may not yet have been published (Jan 2016).

I have now (Mar 2019) received a copy of the official enquiry into the crash, a very thorough document that dispels several misconceptions, though doesn't (and probably couldn't) say why or how two such experienced pilots got themselves into such an inextricable situation.