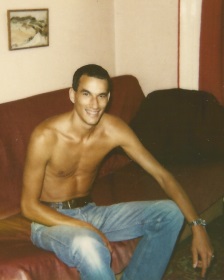 The use of such an informal portrayal can be justified on two counts – firstly that there are very few other photographs available of Roy, and secondly that it captures a relaxed, happy and communicative mood that few of us have seen him in for a very long time indeed. This is not to speak ill of him; it just so happened that Roy found the world very little to his liking and, I think, always felt ill at ease with humanity in general, and authority in particular, for which he had little respect or patience.

This was perhaps just as uncomfortable a mindset for him to live with, as it was for others around him, and from an early stage of adult life he took to a variety of mood-enhancers which, as he became habituated to them, he had ever-increasing recourse to. Unusually tall, he was afflicted by chronic back-pain, and perhaps as a result of early sexual and/or hypodermic misfortunes he also suffered from one form or another of hepatitis. Heavy-duty analgesics became a way of life. In his final years, eaten away by cancer of the liver, he self-medicated with morphine, which enabled him to avoid hospitalisation until just before the bitter end, by which time the cancer was of course inoperable.

It was agreed by all who knew him that Roy had an excellent brain, and this was complemented by a first-class education. Like his father, uncle and cousins before him, he was sent to Saint Ronan's1, 2 preparatory school (1961–1963), but then closer to home at Sussex House3, 4 (1963-1965). Thereafter, like his cousin Peter, he was sent to Gordonstoun5, 6 (1965-1969), rather than Rugby, the public school at which his father, uncle and elder brother had been educated.

Tertiary education likewise followed a familial pattern: as had Ron and Bill, Roy progressed to Pembroke College7, 8, University of Cambridge, (1970-1974), to study (or 'read' as they say in England) the subject of Anthropology, a subject dear to his father's heart. But at this point the wild side started to emerge. Having been caught in the act of selling heroin in the College Library, he was bounced from the Department of Archaeology & Anthropology, but was given a second chance in the Department of Land Economy. Even then, a good deal of paternal pressure and influence was needed for Roy to tackle the final examinations, and (according to his tutor) he was lucky to scrape through them. His BA was followed three years later by an honorary MA.

I do feel a considerable degree of sympathy with Roy's educational vicissitudes, as I myself had some years earlier fallen from grace in an almost exactly parallel manner (though beer and girls, rather than heroin, had been the cause of my downfall, and it was subsequently a fellow student rather than paternal influence that had steered me successfully through Finals).

Quite what Roy did in the mid 1970's after coming down from Cambridge is not entirely clear, but it may have been at this point that he began his intermittent involvement with landscape gardening. Business stationery headed C.G.S. Stamford, Landscape Contractors, Design and Construction, Garden Maintenance survives from the era following his parents' move to Lincolnshire in 1986, but rumours circulated a decade earlier that he had already tried his hand in this direction.

The following verbatim summary of Roy's military career path is taken from notes provided by his brother and by a military colleague from way back who kept in touch and indeed gave comradely support during Roy's final decline. It was read aloud by the clergyman who officiated at Roy's funeral:

In the late l970s he went to Rhodesia to support the people there in their fight against the Communist insurgents attempting to take control of the country. Based in the Fort Victoria area in the south of the country he formed part of an anti-stock theft team aiding remote farmers. His work there produced a number of successful engagements with terrorist forces.

With the fall of Rhodesia and the creation of Zimbabwe in 1980 Roy moved south to join the South African Defence Force. 44 Parachute Brigade absorbed many of the ex-Rhodesian forces, and Roy with the rank of Sergeant ran the Intelligence section of the brigade. He attended and came top of the Intelligence Course but his height and well-spoken voice singled him out for special attention, which was not always to his advantage in that Afrikaans-dominated army.

There is the story of how, around then, his father telephoned the colonel of Roy's outfit, at that time engaged in mysterious action in Namibia, to enquire (off the record) how "the boy was faring". It turned out that the boy was in fact in jail owing to a minor misunderstanding!

Roy's next military involvement was part of a mercenary training team in Colombia under Peter MacAleese, his old Sergeant Major at 44 Para Brigade, where militiamen were being prepared for operations against FARC, the pro-communist guerrilla group. He phoned briefly once from some jungle in that region, complaining that in a context where "everyone was into buying, selling, or using illegal drugs, it was difficult to tell who were supposed to be the baddies!" (The deployment was cancelled before it was necessary to go into combat.)

Further adventures saw Roy news-gathering in Afghanistan with Terry Tangney, an old friend and colleague from 44 Para Brigade, and later providing security services in Russia. In 2003 he filmed child soldiers on the Liberian front line.

Between 2003 and 2006 Roy was analyst for Jane's Intelligence Review, based in the Ivory Coast, and he also gathered intelligence for a number of large rubber estates as well as various government Military Intelligence agencies. (His sister-in-law Sarah Kaulback [daughter of Dan Gill, the renowned geologist] translated his remarkable English reports into French, in which language they were eagerly bought by the agencies of several francophone governments.)

Failing health ended that promising career, and he returned home to England. More recently he consulted for the BBC World Service, and he was political and military consultant for his company Pathfinder Protection, which assisted government and U.N.forces in a number of African countries.

Chronic ill-health meant that Roy was never to return to Africa, and he remained at home to care for his beloved mother Fenja, whose death preceded his own by only a few weeks.

Roy's former mentor Peter McAleese, a legend in Special Forces circles, attended Roy's funeral despite the accumulated injuries and osteoarthritis with which he has been increasingly afflicted over the past couple of decades. It was the publication of his memoirs (No Mean Soldier, Orion, 1993) that led directly to the notorious feature The tough and the toff in the Sunday Telegraph on 21 Nov 1993, in which McAleese was portrayed as little better than a thug and Kaulback as an effete and languorous aristocrat (does anybody out there still remember Sir Percy Blakeney in the Scarlet Pimpernel stories?).

Well, what a travesty of the truth! Peter McAleese is an articulate, softly-spoken, thoughtful and literate individual, disarmingly cherubic in appearance, whereas Roy's demeanour became increasingly paranoid and scary as the years went by and his illness progressed. And patrician he may have been, but aristocratic not (though he did adopt the prefix The Honourable in later years).

Be all that as it may, Peter had some very shrewd things to say about Roy (whom he evidently liked, of course, in a slightly exasperated sort of way!). Roy, he said, was like a skyscraper that only started at the seventh floor – he was widely read in military strategy, but lacked the self-discipline and tactical skills that would have come from the basic training that he had missed-out on at the very start. Interestingly, as is touched upon in the article, Roy had spent a brief initial period in a (possibly the Coldstream) Guards regiment, but had failed the medical. They'd possibly taken a blood-sample and recoiled in horror!

And a number of insights were voiced at the funeral, regarding the difficulties of his upbringing which he could never successfully resolve. Again, I deeply sympathise. Tout comprendre c'est tout pardonner, they say, and I also like Voltaire's deathbed quip, "Dieu me pardonnera. C'est son metier". So we can safely leave Roy to the Higher Tribunal which will surely sort things out for him.

Shortly before he died, Roy read a select few of his poems to a visiting family member on the Townend side who was on a tour of duty, so to speak, to keep the household on an even keel.

I made enquiry about these on the day of Roy's funeral and was presented with an assortment of his handwritten jottings. From these I've identified a number of poems, some in various stages of completion, and have typed-up the complete versions. Not many, as you can see, but maybe more will turn up as the executor goes through the huge backlog of household paperwork (Roy makes reference to at least one another, entitled Sage's Death Song.) Unfortunately none of the poems are dated, so any literary merit can't be assessed chronologically, but they all seem to reflect a quite tranquil frame of mind and IMHO are probably of youthful origin.

Some very pleasantly retro pictures of Roy in the early 1970's have just been shared by Lindsay St. Claire, who was a close friend of his at that time. They were taken in the beautiful East Coast village of Walberswick, where Bill had bought a slightly ramshackle house as a country retreat where he and his two sons could shoot the avian wildlife on the nearby salt-water marshes to their hearts' content. 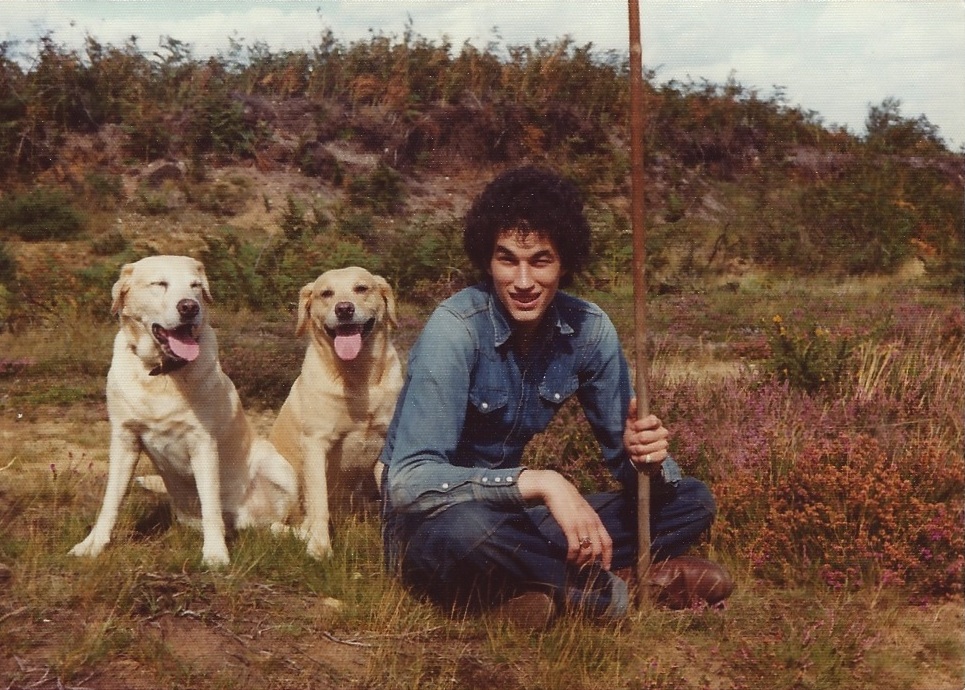 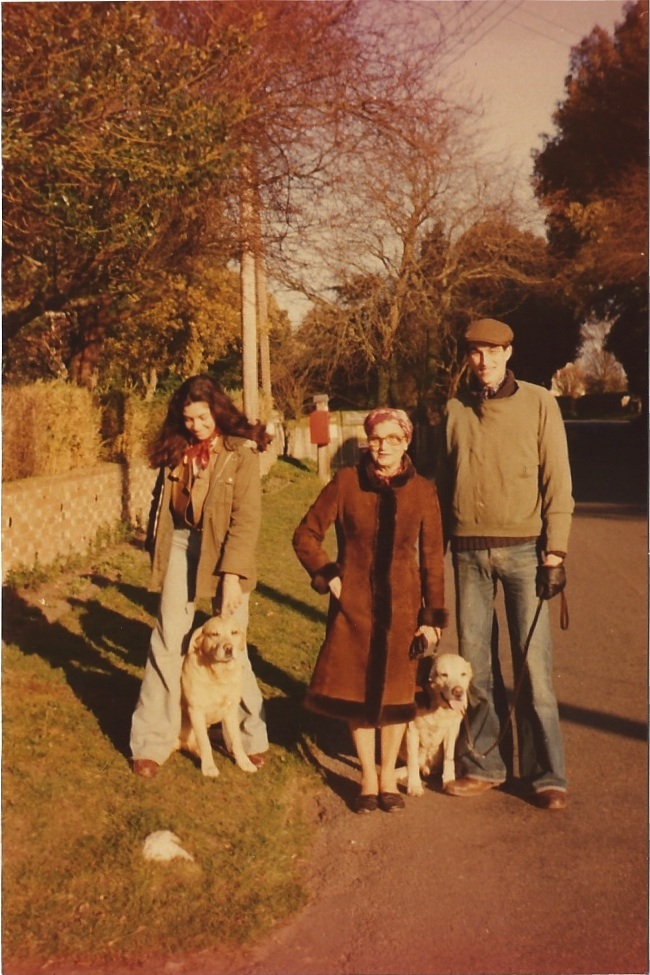 Lindsay with Fenja and Roy

Lindsay, Roy et al (the picture quality has deteriorated over the years)