The book I'm about to reference is the most magical and fascinating accomplishment. Small wonder that its author is the daughter of Dr Jacob Bronowski, possibly the most erudite, influential and beloved of all the major intellectuals in British public life a generation or two ago. Prof Jardine's book has much to tell us in numerous places about Hooke, Wren, St Paul's Cathedral and the catenary curve. Here is one extract.

"…the curve that intrigued Huyghens throughout his life was the catenary, the U-shaped loop of a simple, heavy chain hanging under gravity. Huyghens' very first piece of mathematical work, sent by his proud father to Mersenne for comment, proved that the hanging-chain curve was not a parabola as Galileo had [at first] believed. Much later in [Huyghens'] life, in 1690, Jacob Bernoulli issued a challenge to all comers, …, advertised internationally in the journal of pure mathematicians, the [German] Acta Eruditorum, to find the curve of a hanging chain. Huyghens pointed out to Leibnitz that he [Huyghens] had dealt with the catenary when [he] was only 15 (actually he was 17). As a result of the competition, the correct equation for the hanging chain was finally arrived at and published in the Acta Eruditorum in 1691. Huyghens was indeed one of those that came up with the correct solution."

But what did he really come up with?

I can't find any detailed account of the solution provided by Johann (aka Jean) Bernoulli, the other successful contestant, but it isn't likely to have been explicit either. There is absolutely no doubt that all three of these three great mathematicians had correctly and unambiguously characterised the curve, but they had done so in non-algebraic terminology.

Indeed, the vital concept that they lacked, the natural exponential function exp(x) = ex was only first defined and investigated some years later, by the self-same Johann Bernoulli, who published his findings in the best-selling Principia calculi exponentialium seu percurrentium in 1697.

I'm beginning to suspect that my audience is getting a bit restive, shuffling its feet and looking surreptitiously at its wristwatch. Indeed one or two of the rowdier elements at the back are starting a slow handclap and a chant of "Why are we waiting?". There could well be a rush for the exits if this elusive formula isn't revealed pretty soon, and so you may like to click here and now for a very clear and authoritative derivation presented in a deservedly popular textbook first published over a century ago.

But as Oscar W remarked about the cigarette, it is exquisite, and it leaves one unsatisfied. By this I mean that that the derivation has an economy and subtlety that practically brings tears to the eye, but it demands more of the reader than most people would feel comfortable with these days. It also leaves one completely in the dark as to how the formula could be used in practice, as there is no explanation as to how the parameters involved can be deduced from practical realities. For both these reasons, and also because I love explaining things, a more detailed treatment is now presented. Or you could rush for the exit. 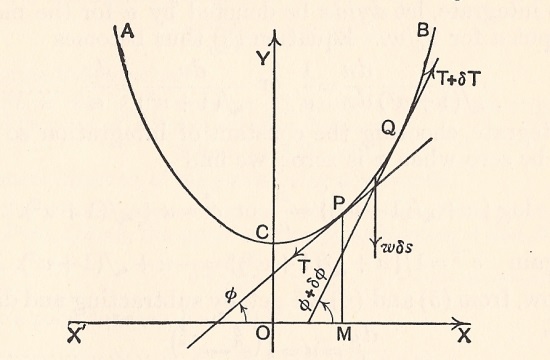 Curve ACB is the catenary of course, A and B being the suspension points. The chain is assumed to be uniform, with a linear density (ie weight per unit length) of w. PQ represents a typical small section of the chain, of length δs and mass w δs.

The conditions for static equilibrium of this small section were discussed earlier, and they can be represented algebraically as follows